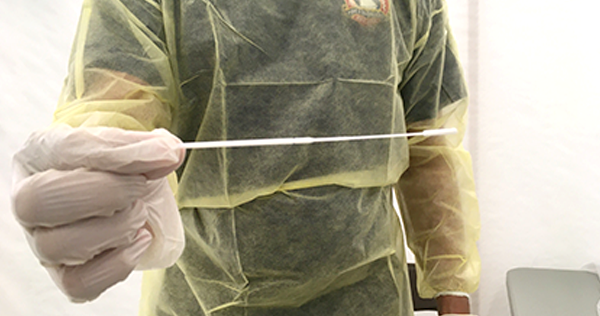 For now, Strang says you should only get a PCR test if you have symptoms or COVID contact. THE COAST

Nova Scotians waiting on a PCR test result right now may be watching their phones for longer than 72 hours.

This week, Nova Scotians turned out for COVID-19 tests in record numbers. So much so, in fact, they’ve overwhelmed the testing system.

"Thousands and thousands of Nova Scotians have done what we have asked—get tested,” said chief medical officer of health doctor Robert Strang at the C19 briefing on Friday, April 30. As a result, there are approximately 45,000 tests that have been completed as far as the nostril swab, but those swabs still haven’t been confirmed positive or negative by the lab.

“Because of that, there currently is a large backlog in the lab of about three days," Strang explained. “We need to expect high case numbers in the days ahead as the lab and public health get caught up.”

If you’ve maybe been exposed you’ll most likely have to isolate until you get your test result: Province makes a major change for potential exposure sites and the need to self-isolate.

You read that right: Nova Scotia’s COVID situation may actually be a lot more serious than reported. According to the most recent data on the province’s C19 dashboard, tests come back as positive .9 percent of the time; that would mean 405 positive cases waiting in those 45,000 tests. As of April 30, there are 589 active cases confirmed across the province and 22 people in hospital.

“The backlog in the lab means our cases are likely much higher than today’s reported number of 67,” said Strang.

To allow the government time to catch up with both tests and data entry, Strang said the province will be changing who can get a PCR (polymerase chain reaction) test in the short-term, and who should just get a rapid test. PCR tests at primary assessment centres will be only given to the people most likely to have COVID, “so that our testing volume matches what our lab and public health can do,” Strang said.

Proceed with caution: contact tracing has slowed: If you’re waiting for clear guidelines or a call from public health, it may take longer than normal.

Only those who have symptoms, have been a close contact of a case, have been at a known exposure location or who have travelled beyond Nova Scotia, Newfoundland and Labrador or PEI should book a full, 72-hour-or-more for results, PCR test. Strang said these limited spots should be “reserved for the people who need to have the more accurate PCR testing.”

The government will be relying on Nova Scotians to be upfront and honest about their symptoms, something that has worked out OK so far. “If you go online,” said Strang, “don’t pretend you have symptoms if you don’t have symptoms.”

In the meantime, Strang encouraged anyone who already has an appointment to cancel it or simply not show up. Instead, you can find out where to get a rapid test.

For now, these pop-up or rapid tests are limited, but the province says more will be coming soon. “If you don’t have one close to you, we’re working on that,” said Strang. “And we’ll get one in a community close to you soon.”