Cows can’t get COVID-19 so you can stop panic buying milk and thank a farmer instead. 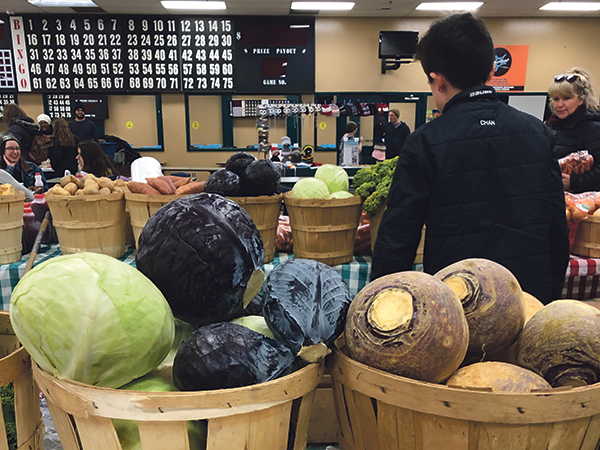 The Coast
Carrots, cabbages, apples and more are in good supply in Nova Scotia.

A s people practice social distancing, head into isolation, quarantine and prepare for whatever happens next, there's one thing everyone needs—food.

While some are hoarding food and supplies, one local farmer says consumers don't need to panic about food supply.

"There seems to be a lot of concern about food supply," says Ted Hutten, a farmer who grows vegetables and sells at the Halifax Brewery Farmers' Market.

Hutten describes going to buy milk in New Minas recently and chatting with a fellow shopper who was stocking up on milk over COVID-19 fears.

"I said 'the cows are literally a five-minute drive away, you're in Annapolis valley. The cows are being milked twice a day, they're in fields that are a five or 10-minute drive, in some cases, from food shops," recounts Hutten.

"I don't understand the thinking that this kind of an unknown is going to disrupt food supply at that level."

Even if there's a disruption to imported foods—bye-bye mangoes—there are local alternatives that can fill those needs. Hutten points to the example of apples, carrots and other fruits that are grown right here in Nova Scotia.

Controlled atmosphere storage allows fresh fruits and vegetables to extend the storage period for up to a year.

"And I don't know if (this disruption) does, but I think it definitely should make people think a little bit about what we actually have right here."

According to a report published in collaboration between the Ecology Action Centre and Nova Scotia Federation of Agriculture in 2010, Nova Scotia imports 87 percent of the food it consumes from out of province. On a national level, 30 percent of food Canadians purchase in stores is imported from outside the country according to Statistics Canada (although the most recent number is from the last published statistics in 2007.)

The way Hutten sells food at the Brewery Farmers' Market has already changed. It was open last Saturday but with more restrictions such as no eating food on site.

"We have the food supply, we have the food demand, but the logistics of getting people to buy it in an environment that's safe for everyone is going to be the challenge I think moving forward," says Hutten, who also is a supplier for international food communities in Halifax.

Hutten also recognizes that the provincial government can make announcements that will change the situation at the farmers' market, like limits on gatherings to 50 people.

Already, major grocery stores in the province have announced changes with store hours set aside exclusively for seniors and others that are vulnerable to COVID-19. Atlantic Superstore began on Wednesday, No Frills will have dedicated shopping hours starting this week and Sobeys will start with "many of our stores in our family of brands" on Friday, according to a letter from Sobeys President and CEO Michael Medline. Superstore has also waived its fees for express pick up of groceries.

Come back here or check with NS public health for the latest reliable updates. In the meantime, wash your hands, cover your cough, wipe commonly used surfaces and stay home if you feel sick.

"Solar chickens" and the future of farming

Quickies in the time of COVID-19

Surviving Canada’s overdose crisis under the shadow of COVID-19