Katrina Tomas
A refresher on current COVID restrictions, which will now be in place until Jan 31.

No more than 10 people can closely gather together, plus other public health regulations in place until January 31.

Early rock ‘n’ roll star Chubby Checker knew a hit when he saw one—and, more importantly, knew how to keep ‘em coming: While his all-time bop “The Twist” became one of the most popular songs of the century upon its 1960 arrival, he kept momentum up the following year with “Let’s Twist Again”, a sequel that doesn’t suffer middle child syndrome. The whole thing propelled into the stratosphere as his albums Twist It Up and For Teen Twisters Only kept cool kids’ pelvises swivelling throughout the rest of the decade. (He even had a slow jam duet aptly called “Slow Twistin” in 1962 that might’ve got your grandma pregnant.)

I find myself thinking about Checker, the party jam king of his day, a lot lately as we continue what feels like a forever loop of the same song and dance with COVID-19.

As case numbers continue to break records in Nova Scotia, welcoming the new year of 2022 also meant welcoming some returning pandemic regulations and personal safety measures. In late December, the province announced restrictions that were supposed to end January 12. But today those restrictions got extended to January 31, and Nova Scotia made major changes to the self-isolation policy for COVID patients and close contacts. It's a lot to follow. Here are the isolation changes. And for what the rules on gathering and shopping are currently, get ready to twist one more time, as we refresh you with the current restrictions in Nova Scotia:

For plain old hanging out with people—no masks, no distancing, yes hugs—the largest allowed group is 10 people, whether indoors or out. The provincial gathering limit page says it's supposed to be a "consistent social group," meaning the same 10 people being exclusive with each other. Choose wisely.

In terms of workplaces, the government is strongly encouraging any workers who are able to work from home to do so. Pour one out for the many, many front line workers who don’t have this privilege—and who are no longer earning “hero pay” at this point in the pandemic.

When it comes to restaurants and drinking establishments, proof of vaccination is required for sit-in service (maximum 10 people at a table), with masks and social distancing required when not sitting at your table and when awaiting carry-out orders. While many local eateries have decided to flip to take-out-only during the latest case spike, this is up to the owners’ discretion.

In the world of retail, masks and social distancing remain, with many stores offering curbside pickup and delivery options—while the pandemic’s continued strain on small businesses means it’s more important than ever to support independent shops. It might also be time to consider returning to the early pandemic model of designating one shopper per household and trying to venture out less often. (Check out some of the top ways to support local here.)

At the library, in-person programming has been paused—but those looking to browse the shelves need to mask up and follow limited capacity and social distancing, as per new measures the Halifax Public Libraries introduced on December 15. Rooms are also unavailable for booking until at least January 31.

When it comes to personal services, ones that require you to remove a mask (like beard trimming) are not permitted. Hair salons and similar businesses are currently able to work at maximum capacity, provided everyone is masked and socially distanced.

In the arts and culture sector, concerts, plays and other performances are being cancelled in droves, since festivals, in-person performances and sports are currently not permitted. Capacity in places like movie theatres has dropped to 25 percent. (Virtual performances are still allowed, so long as 10 people or less are involved, a number that bumps to 25 if the performance is streamed outdoors.)

Despite this, live music and dancing are technically still allowed at restaurants and drinking establishments—while masked.

Neptune Theatre pressed pause on in-person performance last month, but as of press time it’s unclear if the venue will stage its next play, slated to debut on January 25. The Halifax Mooseheads, meanwhile, are reaching out to season ticket holders mid-month with an update on what to expect (the entire league is on pause until January 14).

Museums and galleries, meanwhile, remain open at 50 percent capacity, with masks and social distancing rules in place. For movie theatres, it’s 25 percent capacity—and masks need to stay on even while eating or drinking or while seated.

Weddings, funerals and faith gatherings are currently operating at 25 percent capacity, with a maximum of 50 attendees and social distancing and mask requirements. (There’s never been a better time to do a small-scale ceremony, according to local wedding industry experts.) 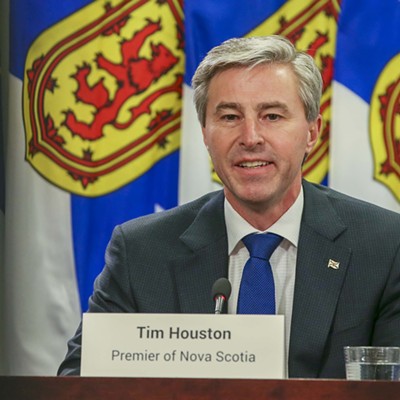