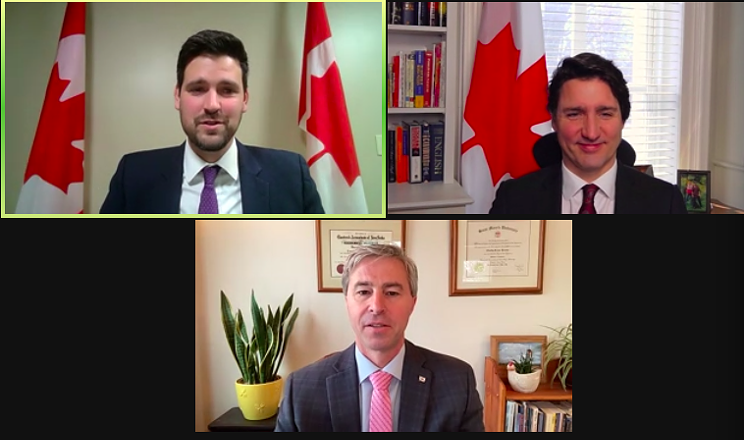 Childcare costs are dropping by 25 percent this month, 50 percent by the end of the year.

Nova Scotia’s progress towards $10-a-day childcare by 2026 is ahead of schedule, with prime minister Justin Trudeau and premier Tim Houston announcing today that daycare fees will drop by 25 percent this month and by 50 percent by the end of the year.

In a virtual announcement the premier and PM, joined by federal and provincial ministers, announced that fees for daycare will drop by an estimated $200 per month (down 25 percent) beginning retroactively on Jan 1, though parents will continue to pay regular fees for the time being. In April, cheques or credit for money saved will be made available to families.

Houston said the impact of this change “will be felt for generations.” The move towards affordable childcare, which is part of the Canada-wide agreement to make $10-a-day (on average) daycare available by the end of March 2026, is aimed particularly at supporting women in rejoining the workforce and will help kids “get the best possible start in life,” he said.

This plan also comes with 1,500 new not-for-profit daycare spaces to be made available by fall. This is following the target of adding 9,500 new spaces in childcare by Mar 31, 2026.

NDP early childhood education critic Suzy Hansen said the historic advancement on affordable childcare “is the result of decades of campaigning by millions of people across the country. Thank you to all those who have been part of this fight,” she said in a statement.

Concerns from the sector

While the news is celebrated by many, owners of private childcare facilities are left with questions and concerns about what the change will mean for their businesses. Bonnie Minard, owner of Portland Daycare Centre and co-chair of the Private License Administers Association for childcare in Nova Scotia says she and her peers in the industry are “very, very concerned.”

“I heard in the press conference when they said this would help so many women get back to work, but many women feel their businesses are being taken away from them,” Minard said in an interview.

The province has given private childcare centres until March to decide if they will continue as commercial license holders; transition to join the Canada-Nova Scotia early learning and childcare agreement; or operate as a not-for-profit, according to documents sent to daycare license holders Thursday. Centres that choose not to transition to the program will lose provincial funding and will be ineligible for childcare subsidy programs.

Minard says the information package, shared with the sector yesterday, leaves owners with many questions, particularly around funding formulas and pay scales. “It’s trying to make a decision with no information at all,” she said.

Nova Scotia is making grants of up to $15,000 available by Jan 18 for professional advice on what decision is best. Minard says this would be like going to ask an accountant for advice without giving them any information.

Minister of education Becky Druhan said she recognizes worries from the industry. “Change can be scary for people. This is new for everybody,” she said during Friday’s press conference.

“Absolutely there were questions arising from the information shared yesterday, it was a lot of information. But I’m confident as we move forward and work closely with them… the department is available to answer questions and move forward hand-in-hand with them,” Druhan said.

Correction: an earlier version of this story incorrectly said that just not-for-profit child care centres will see their fees reduced.