Not everyone is accepting Stephen McNeil's apology

Some of those fighting against Alton Gas aren't swayed by premier's “conquered peoples” regrets. 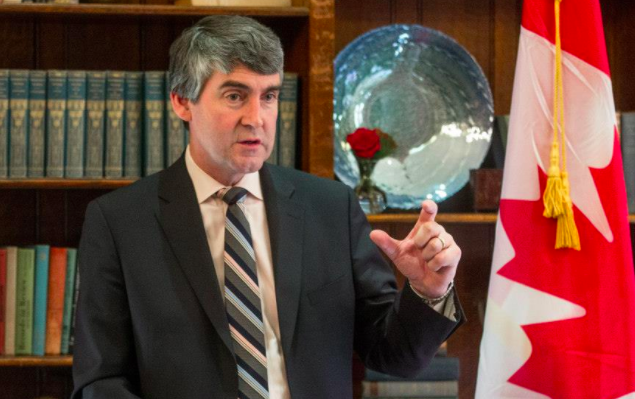 Premier Stephen McNeil has apologized for a legal brief referring to the Mi’kmaq as conquered peoples, but some feel he needs to back up his words with actions.

On Thursday, McNeil started off his meeting with the Assembly of Nova Scotia Mi’kmaq Chiefs by apologizing for a brief filed in the court case over Alton Gas that argued the Nova Scotian government's duty of consultation only applies to “unconquered peoples.” Chief Terry Paul of Membertou First Nation and chief Sidney Peters of Glooscap First Nation said they accept the apology.

But the First Nations band that's been fighting against the Alton natural gas storage project was left out of that meeting. The Sipekne'katik are not a part of the Assembly of Chiefs.

“I haven’t seen [the apology], so I can’t accept it,” says Cheryl Maloney, a former band councillor for Sipekne’katik.

She feels the premier's apology should have been directed at the people Shubenacadie and Indian Brook, as those are the communities currently facing the province in court.

“I think the apology was just meant to smooth over the negotiation table with the rest of the chiefs,” says Maloney. “The relationship has to include...the Mi’kmaq that are affected by projects; the Mi’kmaq that use the rivers and the resources.”

Maloney is one of many people who has protested against the Alton Gas project, which will hollow out massive salt caverns to store liquefied natural gas and dump the resulting brine back into the Shubenacadie River.

The Assembly of Mi'kmaq Chiefs expressed support for Alton Gas earlier this year, causing the Sipekne’katik band to issue a press release underscoring that it is not represented by the Assembly and “is the original signatory to the 1752 Peace and Friendship Treaty.”

The Sipekne’katik band also filed an appeal with Nova Scotia’s environment minister saying it was not adequately consulted about the project, which is in violation of its treaty rights.

During a three-day hearing last week, provincial lawyer Alex Cameron read a legal brief in court that said the Treaty of 1752 is void and the province had no duty to consult a conquered people.

The province is launching a review to look at how those arguments made it to court in the first place.

Naiomi Metallic—Mi’kmaq lawyer and assistant professor at Dalhousie—is glad the premier expressed his regrets but she’d like to see him take action to back up his words.

On Thursday, the NDP released a statement calling on McNeil to officially withdraw the 'unconquered' comments. “The Premier should write to the judge to correct the record,” it reads. Metallic agrees.

“I’d also like [the government] to make sure that this never happens again,” she says. “There’s no need to make those arguments. There’s absolutely no need in 2016.”

Metallic also questions the government's choice of counsel. Cameron's 2009 book, Power Without Law, was is largely critical of the Donald Marshall decision. After it was released, the Assembly of Nova Scotia Mi'kmaq Chiefs requested that Cameron “no longer provide advice to or representation of Nova Scotia in respect of all Mi'kmaq issues.”

“He clearly has a very particular point of view on these issues,” Metallic says of Cameron. “The premier is telling us that’s not their position….so, you know, there should be some action associated with this apology to make it meaningful.”

For Maloney, Cameron’s argument is consistent with the experience the Sipekne’katik band has had in its dealings with the province.

“We’ve been trying to consult in a meaningful way that will engage the people that are affected by these projects,” she says. “The position of the province has been ‘We’ll deal with the KMK [Kwilmu'kw Maw-klusuaqn] chiefs and not the people.’”

Ed: An earlier version of this story stated the band that the brief was targeting was left out of the apology. According to Global News, the premier's office says chief Michael Sack from Sipekne’katik First Nation was there and direct apology was given to him.