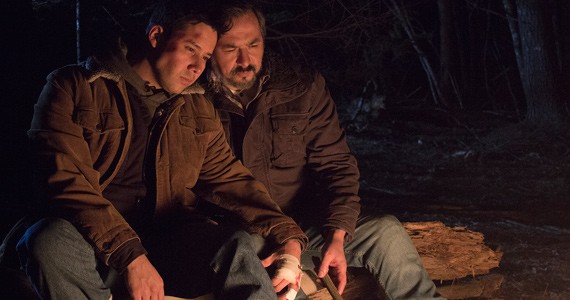 Justin Rain and Glen Gould keep warm in the woods.

Bretten Hannam shot his first feature film, North Mountain, over 13 days in January down near Kejimkujik—the Mersey River and Caledonia area, not too far from where he grew up in the Annapolis Valley. It was brutally cold.

"We finished on February 1, and I didn't have any feeling in my feet below my ankles," says the 31-year-old Hannam, a NSCAD grad who both wrote and directed the film. "A week later I still can't feel my feet. This is a concern, so I go to the doctor. He asks me what I'd been doing, so I tell him: 'Standing for days in the snow up to my knees, not moving much in not-so-great boots.' He says, 'This isn't a good sign. You've probably damaged all the nerves in your feet. Maybe the feeling will come back, but maybe it won't.'"

It was August before the sensation fully returned, half a year since Hannam wrapped on North Mountain. The things we do for our art.

The film is a genre amalgam: A young man, Wolf (Justin Rain, who plays Quentin on the Showcase series Defiance), ekes out a living in the woods, hunting, trapping and taking care of his grandmother. Wolf finds an older fellow, Crane (Glen Gould, recently of Michael Melski's Charlie Zone), with a bag full of money on the run from gangsters. It's not long before the bad men track them down. Blood splashes on the snow.

"My priority was the emotional spine of the story, plus the cool genre bits," says Hannam. "You need both. There's always a degree of compromise, but I'm pretty satisfied with how it turned out."

Working in genre means structural familiarity, but there are fresh elements: Wolf and Crane are First Nations people who may also be falling in love.

"Part of my background is First Nations," says Hannam, Mi'kmaq on his father's side. "I usually say I'm a bit of a mutt." He's also gay. Growing up a big fan of b-movies, horror and westerns, he never saw much representation of visible minorities or same-sex romance. "In genre there's almost none," he says. "I've been very conscious of that moving forward with the stories I want to tell."

Hannam watched Indiana Jones when he was younger, and invented an elaborate backstory for the fictional archeologist, suggesting Indy's adventures beyond the Ark of the Covenant. "I remember pretending he was gay—maybe."

North Mountain is produced by Kevin Kincaid, executive produced by Thom Fitzgerald and funded through the Telefilm Micro-Budget program, which provides $250,000 for emerging filmmakers.

As it premieres at the Atlantic Film Festival, Hannam is already busy polishing new scripts, one of which he recently took with him to Los Angeles' Outfest. He describes it as "an LGBT aboriginal survival slash coming-of-age story set in the Arctic."

Clearly, the almost catastrophic loss of feeling in his feet is no detriment to his continuing to make wintry feature films. "I'm a slow learner," he says, chuckling.