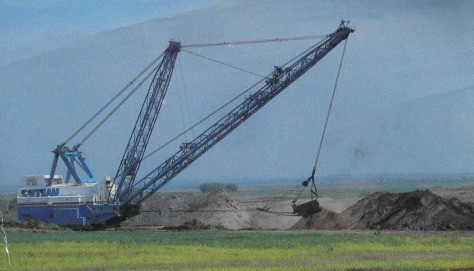 Day 21
Medicine Hat, Alberta to Havre, Montana to Pick City, North Dakota
0 miles
I am falling behind in things I want to write here. I get a ride from Medicine Hat to Havre with Tyrone Smith, who I will write about soon. Joyce drives me to the gas station where I meet Tyrone, in her pajamas. It is 6:15am. I love people who will go places in their pajamas. In Havre I catch a train going to Minot, ND. Minot is not pronounced ‘Minneau‘. It is pronounced ‘My Knot’. The train get in at about 9:30 pm. It is dark and raining and on the internet all cheap motels are booked. I ask a few people if they know of cheap motels near the station and one guy says his brother is coming to pick him up and they will be happy to drive me around looking for a place. We have time to talk, Richard and I, before his brother gets there and I tell him I am going to get to Pick City tomorrow to start on the North Country Trail. He laughs. “We’re going to Pick City," he says. His brother Dale arrives in a giant Suburban. Both Dale and Richard are giant men, 400 or 450 pounds, in their early thirties with shaved heads and goatees. They are really nice. We stop at a drive-through burger place and they each get 2/3 pound burger combos, which they inhale while we get gas. It’s abut an hour drive to Pick City. Dale works operating giant equipment for the Antelope Valley Station of Coteau Properties, a coal operation over near Beulah in Mercer County. Richard digs out a postcard of the 105 cubic yard dragline Dale runs. They tell me its bucket could hold six Suburbans.

They drop me at Motel Sakakawea in Pick City and notice the sign on the door has a number to call for a room. Dale hands me his cell phone. The motel guy is in the next town but he will come right away. Richard and Dale leave. The guy arrives and I get a cheap room. While I am dragging Bob up the stairs the front tire catches on a nail and I have my first flat tire. I don’t worry. I have felt very lucky today and tomorrow will be tomorrow.

Day 23 Pick City to Coleharbor, North Dakota
22.4 miles (36.05 km)
Fairly good going except for a dead end where I am forced to turn around and go back two miles or so, and a creep who is following me in a dark blue pick-up. I see him first as I reach the town of Riverdale. He is parked by the road and I ask directions. The truck is stuffed with his stuff—he lives in his truck. Half a mile later he pulls up beside me and offers a map which is a national map, and therefore has no useful information for me. Half an hour after that he is parked outside a gas station where I get coffee—black—they have no sugar, no cream, no milk, no coffeemate. I ask the woman if everyone in North Dakota drinks their coffee black. “Yep,“ she says, “everyone.“ Then a mile or so down the road he is parked again. I pretend not to notice. Finally I am off Route 200 and on a gravel road down to Wolf Creek and he pulls up beside me. I forget to be scared and I lay into him. “This,” I yell, “is the fifth time I’ve seen you and that’s four times too many. Where are you going?” He says he needs to lie down somewhere. “Not down this road,” I say. “I’m writing down your plate number.” I get put a pen and paper and do that. “If I see you again I will call the cops!” I am really yelling now. What a creepy fuck. “No need to do that,” he says, and he turns the truck around and heads back towards Riverdale. I watch until the truck is out of sight.

I move on. A woman in a car stops to see if I have a baby in the carriage. She tells me she owns a building on the edge of Coleharbor and I can rest there if I want. I don’t get to Coleharbor until about seven o’clock, and I want to tent at her building. Her name and number are on a sign on the door, and amazingly, there is a pay phone there so I call her, get a machine and ask permission to camp behind her building. I tell the machine I’ll try again in a little while, and walk into town to look for a Coke or snack and there she is, Susan Moore, sitting on a ride-on lawn mower, talking to a guy also sitting on a mower. I camp on the space she is mowing—much nicer grass than back on the edge of town. The cut grass smells great. The light is beautiful. Birds sing.

Day 24 Coleharbor to Turtle Lake, North Dakota
12.8 miles (20.6km)
Almost unrelenting misery. It rains in the night. In the morning my tent floor is a puddle, and therefore my sleeping pad and bag are soaked. I decide this is due to the ground sheet sticking out beyond the tent and funneling water underneath; it has rained before and I have not been in such a state. The tent fly is soaked. For a moment I think about staying put but then pack up, shoving all my wet gear into Bob. The small pocket at the back, where I keep things used during the day or possibly needed in a hurry (toilet paper, wet wipes, snacks, lights, money, cable ties, camera, loose change, candy wrappers, etc.) has some water in it so I move that stuff into the main compartment. I don’t bail it out, but leave the (crappy, since it let in all that water) zipper undone so the wild wind might help it dry out. This will turn out to be a mistake.

I head up a country road to get to the Audubon Wildlife Refuge. It is a miserable day. The wind is strong and so I have no coffee—the stove doesn‘t work in high wind. It rains off and on. The rain makes the unpaved road slightly muddy, which slows my going.

At the Audubon I am given coffee and directions to the eight-mile Auto Tour route within the park. The woman helping me is very serious and earnest. She does not smile. She tells me to take a short cut around some construction. This short cut turns my day into disaster.

The dirt is so soft I am up to the gunwales in mud. The wheels are packed with mud. It’s all over me as I stop to carve mud from the wheels so they can turn. It makes more sense to forge ahead than to go back, so I do, and it takes over an hour of me heaving Bob forward six inches at a time. The mud caked to my shoes makes it seem as if I am wearing snowshoes.

Finally on the gravel Auto Tour Route I inch forward into wind that whips whitecaps onto the surface of Lake Audubon. Canadian Geese take off at my approach and fly into the wind almost in place, they make so little headway. After a few hours of this a truck is beside me. Three young guys are out setting traps in the refuge—for skunk and raccoon, which eat the eggs of the nesting birds. They ask if I want a lift and I am driven the rest of the way of the refuge and then they take me further, to some gravel road. “This’ll give you a straight shot to Turtle Lake,” they say. I am off the North Country Trail, such as it is here, but I don’t care. I need to get somewhere. I slog on until about 5:30, wretched and soaked and filthy all over. I use a tire gauge to scrape mud out of the wheels. My shoes are soaked and my socks seem to be calling out to little stones to come cuddle. I daydream about being on my couch in Halifax, snoozing with my cat Bob. When I address my cargo carrier, because its brand name is Bob, I use the same tone I would use with my cat. Today I talk to it often, urging it to move forward in mud. I like using my Bob voice.

At 5:30 or so a car pulls along side and Archie Reinhardt gives me a ride into Turtle Lake where there is no motel, but he knows a place that used to be the Laundromat but now might be rooms to let.

I do get a room, which is actually an apartment, for $25. I take it for two nights—there is no way I can clean up and dry out the gear and be ready to go tomorrow. As I unpack, I see that all the water I did not bail out of the small pocket that has seeped into the main compartment. Everything, including the large envelope of various papers (ID, photos, blah, blah) I carry is soaked. I was five miles out when Archie picked me up. I would never have made it.

I awake feeling ill at ease because I am in another rented space. It is a sunny day but there are wind warnings for gusts up to 60 miles an hour. If that ended up being anything but on my back I wouldn’t have made it five feet. I scrape caked mud from the wheels and body of Bob with Regis & Kathy Lee on the TV and then get in the shower with the wheels to finish cleaning them. Hang up the bag and pad. Prop up my shoes in the sun. Do a load of laundry. I take the fly and body of the tent out back and the wind dries them, with me hanging on for dear life, otherwise they would end up clear in the next county for sure. 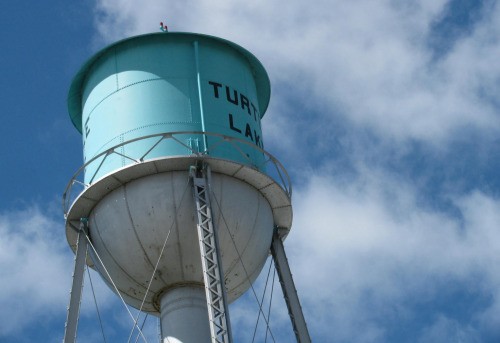 The library opens in the afternoon and has WIFI. Tomorrow I will head east on the 200. It will cross the McClusky Canal where a maintenance road is the NCT. I’ll have a look and see whether to take the trail or stay on the road.