And the CBAs are coming to Halifax next year! 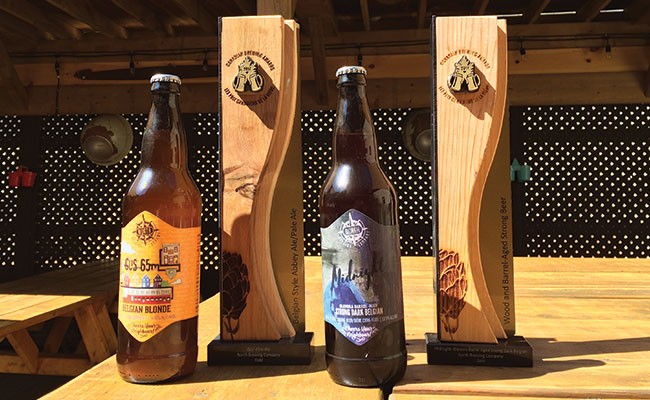 Rozina Darvesh and Peter Burbridge struck gold last weekend. The co-owners of North Brewing Company took home two gold trophies with their first-time entries at the Canadian Brewing Awards, which took place in Ottawa. North’s Gus’ 65m Ale was the victor in the Belgian Abbey/Pale category and its Midnight Glenora Barrel-Aged in the Wood and Barrel-Aged Beer (dark) category.

The awards are Canada’s premier competition among beer and cider manufacturers. This year marks 15 years since the Canadian Brewing Awards started judging the finest beers the country has to offer. This year’s awards weren’t just a win for North, but Nova Scotia, too—the event will take place in Halifax for the first time in 2018. To the folks at North Brewing, having the event take place here puts Nova Scotia on the map in the world of craft beer. “It shows just how the industry has evolved,” said Burbridge. “Halifax now has more breweries per-capita than anywhere else in the country.”

Starting a brewery was a way for Darvesh and Burbridge to stay and build roots in Nova Scotia. The art of making beer helped combine the food science degree Darvesh received from Dalhousie University with Burbridge’s MBA into a family business. The two beers that took home gold in Ottawa were conceived by the couple in the company’s first year. “They’ve been with us since the beginning,” said Darvesh.

Gus’ 65m Ale is a Belgian-style “patio beer”, blonde with citrus notes, created and named for North’s neighbour Gus’ Pub and the 65-metre distance between them. Midnight, a strong brew with tones of cherry, dark-chocolate, whiskey and vanilla is barrel-aged in Cape Breton and bottled in Halifax.

Darvesh says she is pumped to show what Nova Scotian craft brewers are capable of at the awards next year. “We, as a brewing company, get to showcase what we do to the rest of the country,” she says, “open our doors and show-off our province and reciprocate the welcome we received in Ottawa.”