The photographer recreates family snapshots to delve into the layers of their identity. 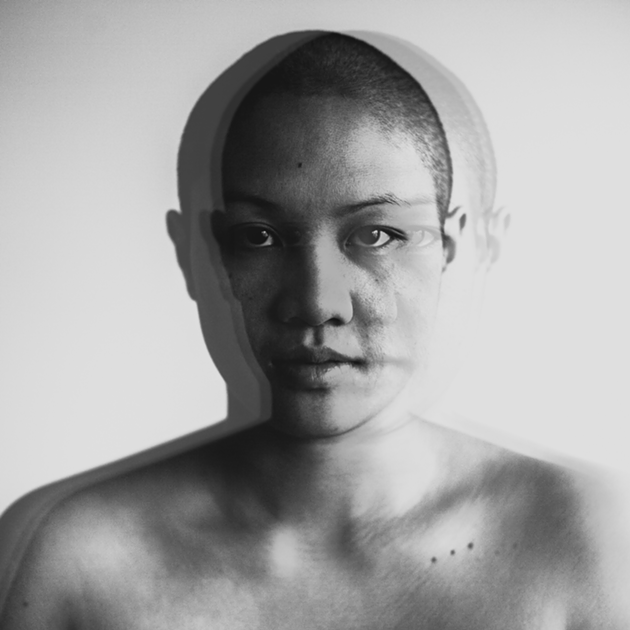 Mo Drescher
Mo Phùng says their Nocturne project stemmed from how they've "been longing to understand my family history."


Migration & (RE)Emergence: The Herring, Clouds And The Blue Sky


Mo Phùng is now older than their parents were when they first stepped onto Nova Scotian soil. They don’t have the exact same clothing their mom and dad wore, making do with thrift store look-alikes. There are other divergences: The differences between an artist and a tailor and former dish washer; Between 1987 and now.


But Phùng doesn’t isn’t concerned with all that. Theirs is a study of similarities, a tracing of familial sameness in the most literal sense. Migration & (RE)Emergence: The Herring, Clouds And The Blue Sky is Phùng’s Nocturne debut and their first art show.


It’s also, as they put it—speaking with The Coast by phone—how they’ve “been longing to understand my family history: Where my parents lived, what their life was like, my ancestors. And just kind of falling into this spiral of finding what my identities are and what they mean and where they come from.”


Phùng spent years slowly prying open their parent’s memories, listening to stories about life back home in Vietnam and their journeys to Canada, folding away the snippets shared piecemeal. They asked their mom and dad for old photos.

Then, this year, momentum began: Phùng re-created the images, posing, in one instance, leg crossed over leg in faded jeans and a white polo in downtown Halifax—just like their dad in the late ‘80s. In another shot, dressed up in a button-down and slacks, jacket tossed over the left shoulder and right arm arrow-straight at their side, Phùng mirrors their mid-20s father down to an earnest smile.


(As Phùng later says of the wardrobe in an email: “I have been carrying around an outfit similar to an outfit my dad had worn while he was in a refugee camp in 1986. It was his running outfit. Faded red polo shirt, red shorts, white socks, and white runners,” the message reads. “I have purchased shirts, pants, watches and hats—to try my best at replicating the photo while also putting a little bit of my own style in there.”)


“This last year of trying to really learn about the multiple identities that I had: I didn’t realize I could have so many,” Phùng says, explaining that the process often found them “playing with the masc and femme sides of myself.”


“I felt comfortable knowing I could be my dad in a photo and be my mom in a photo because I didn’t feel like I was having to switch who I was to be in that role,” Phùng adds of the project, which viewers can bear witness to through nocturnehalifax.ca or their website, re-emergingnow.ca, where images will be shared throughout Nocturne and beyond. “I was like ‘Oh yeah, this totally feels right, being my mom in this outfit or being my dad in this outfit’—it doesn’t feel like going outside of myself to be that and I think that’s a huge part of this: Finding connection and finding what parts of my parents I feel so close to.”


It’s also helped Phùng feel more tethered to a family origin that spools out across two continents and an ocean: “I’m trying to connect with my grandmother, who is my dad’s mom. And I went to visit Vietnam one time when I was 15, and everyone in my family—99% of my family lives there—was like ‘you’re so much like her, you move like her, your feet and your hands are like her.’ And I never got to meet her. She passed before I could get there,” they say.


“I wonder how much we are alike and how much she’d think that. So when I heard ‘Echolocation’ as the theme,”—the theme of Nocturne 2020, that is—“It’s like yes, trying to communicate with the past and with lineages to my family that I didn't get to meet or know about. It’s like: how is there a two-way communication channel? Trying to understand this relationship I was never able to make using this process.”