“I realized how much waste I was producing as an artist.” 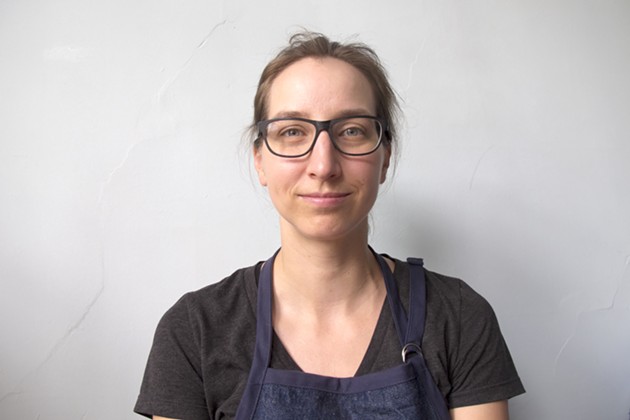 Marie-Soleil Provençal
Provençal shows what Halifax's shoreline will look like in 2099 as she transitions to installation art.

The water pitches and heaves. The air smells of salt. Sometimes, the wood creaks. Don’t be afraid: You’re not about to fall into the Atlantic.


At least, you won’t yet. But come 2099, the Halifax waterfront will look very different. About half the wooden walkway will be gone as climate change causes water levels to rise. The spot you’re standing on? It might be, too—alongside buildings that now dot the harbour, like Queen’s Marque and Casino Nova Scotia.


If you’re having a hard time to visualize this, don’t worry: sculptor turned installation artist Marie-Soleil Provençal’s Nocturne exhibit, Shoreline 2099, will finally make you see it.


“It’s a visual marker, it’s making things more realistic than just words sometimes. I love words, but seeing it visually it’s like ‘oh wait, now I get it’,” Provençal explains.

Climate anxiety has formed a cumulus cloud of concern at the forebrain of Provençal’s art-making over the past year, informing pieces like this, her Nocturne debut. Her evolution to creating Shoreline 2099 is the sort of environmentally minded glow-up that Greta Thunberg would love: Last year, Provençal exhibited a life-sized cement buoy she had created but “I don’t want to work with those materials anymore. They were leaving a big impact: It’s fibreglass, it’s cement. So I’m working more right now towards installation work: Something I can remove without leaving too much traces on the environment, so it’s an interesting shift,” the artist says. “It mostly happened because, at one point, I realized how much waste I was producing as an artist.”

Her Nocturne project—reflective tape on the ground, marking where the new Halifax shoreline will be—is an attempt to end apathy. When asked what she’d say to those who would tell her that the only answer is to divest from big oil and hold corporations accountable, Provençal says: “Yeah but, we are part of those companies, we are part of those governments—we elected them, we’re employees of them. So I think we are part of it, if we want it or not.”


“It was amazing when we were installing it and some people were like ‘Yeah, you’re right’ and other people were questioning us about it, like ‘OK, what do you mean’. So, just generating that dialogue between people: I’d be happy if it’s happening,” Provençal adds. "We can’t make those changes alone. So in my way, sharing it in art is sharing it with others to feel we can change something together.”