No magical kiss for The Princess and the Frog

The return to hand-drawn animation brings back Disney tradition, but sticks too close to old narratives.

Returning to hand-drawn animation, The Princess and the Frog is traditional to a fault. The cultural pinnings and influences of 1920s New Orleans are whitewashed into a retread of the same-old. Aspiring restaurant-entrepreneur Tiana, Disney's too-late first African-American cartoon heroine (then they turn her into a frog), fills the role of the working class dreamer-girl. Those who aren't aware of the gameplan upheld by Cinderella, The Little Mermaid, Pocahontas, Enchanted and whatever else, may see subversion in the self-aware references to wishing on stars, and not object to how Tiana declares independence from wanting to be rescued by a prince only to have that happen to her anyway. By worshipping formula, the movie fumbles opportunity for the narrative freedom of Alice in Wonderland and The Emperor's New Groove when it needs it most. Even with an attractive Jazz-era number near the start, the music lacks local identity, and none of the animated sequences take on as spectacular a flavour as the anthropomorphic waves in Ponyo and the penguin dance under Aurora Borealis lights in Happy Feet. The Princess and the Frog isn't about Disney branching out; it's about everything becoming Disney.

The Princess and the Frog is not showing in any theaters in the area. 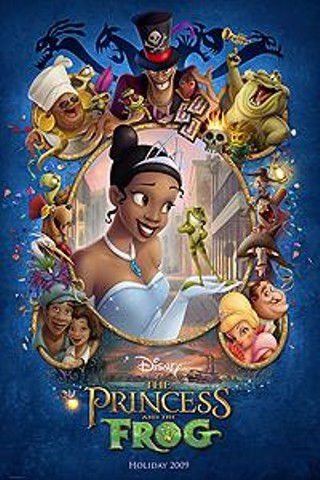