As Halifax uses every planning tool possible to try and create more affordable housing, the city’s biggest new neighbourhood might not have a single unit. 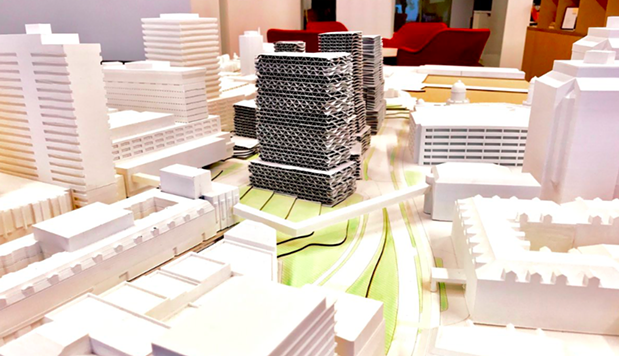 VIA HRM
A scale model of possible building developments inside the new Cogswell district—for ants!

Halifax spokesperson Nick Ritcey responds to this article in an email to The Coast, saying the final decision on affordable housing has not yet been made:

“In July, Regional Council approved an affordable housing work plan setting out six initiatives to increase supply. In the case of the Cogswell district, it’s likely that the use of the density bonusing program and/or the sale of municipally-owned lands would be explored.”

Ritcey says that throughout the public engagement sessions the Cogswell team indicated any future affordable housing will be a policy decision of Regional Council once the land packets are developed.


Even as the need for affordable housing continues to grow across the city, the new neighbourhood replacing the Cogswell Interchange isn’t likely to include any affordable units.

The plan to revitalize the area between the Casino and the Macdonald Bridge along Barrington Street is now 60 complete. Leading up to the next benchmark, HRM’s planning department held a series of public engagement sessions over the past few weeks looking for input on public spaces and building design.

Few attended the kick-off event aside from city staff, designers and architects. But some members of the public who did attend had a common question: Would there be affordable housing in the new neighbourhood, and if not, why?

The Cogswell District is proposed to turn the overpass system currently dividing the north end and downtown Halifax into a lively residential area. It’s one of the most ambitious development projects in the history of the municipality, set to including trails, apartments, parks, rotaries, memorials structures and bike lanes.

As plans for a new neighbourhood are finalized, housing development in HRM continues to stagnate. A 2016 report said the waitlist for affordable housing in Halifax alone was around 1,300 people.

At a regional council meeting in January, deputy mayor Waye Mason made a public stand for housing. He requested a staff report on the possibility of taking over affordable housing from the province.

“I believe we need to take more responsibility,” said Mason. “The amount of affordable housing being built since the service swap has plummeted to almost nothing.”

Affordable housing developer Ron Lovett says the reason he was able to build his properties in Fairview is got cheaper land. Developing a similar project downtown isn’t an option.

It goes back to the Cogswell plan. For the redevelopment to financially work without costing taxpayers, developers have to be convinced they will make their money back in at least 15 years’ time. That means the price of the units that will be built have to be measured against the cost of tearing down the interchange and constructing new properties.

“The rents pay for the debt and the operating cost,” says Lovett.

The north end community bracing Cogswell has long been a home to affordable and public housing for Halifax residents. But those communities, who will be most impacted by the redevelopment, aren’t expected to actually live in the new neighbourhood once it's built.

When members of the public asked during the engagement sessions about affordable housing, HRM staff explained that the design wasn’t intended for members of the surrounding communities, but to better integrate them with the downtown core by installing luxury apartment towers, public parks and a transit hub. Connecting the Africville Trails to Africville Park, or otherwise making the park accessible by foot or transit, however, isn’t part of the plan.

Meanwhile, the demand for affordable housing continues to increase. In response, Lovett bought four buildings last year; securing $1.19 million from the province and government to convert two of them into secure affordable housing.

Habitat for Humanity was also approved last month to build its largest Canadian housing development project ever in Spryfield.

Lovett admits it’s not an easy market to get into.

“There’re just so many costs.” On top of financing, the permit process and to navigate building laws when it comes to affordable housing are costly and confusing.

Lovett says a dedicated ambassador would be helpful in connecting developers to affordable housing programs, showing them the resources available on all levels of government. If they were better educated about the incentives and supports available, Lovett says developers would be more likely to entertain the idea of going affordable–if not downtown, then at least in the greater municipality.

“It would make it a lot easier,” he says.

For now, for the most part, he’s left to his own devices. “I’m Googling, meeting with MLAs, and trying to figure it out.”