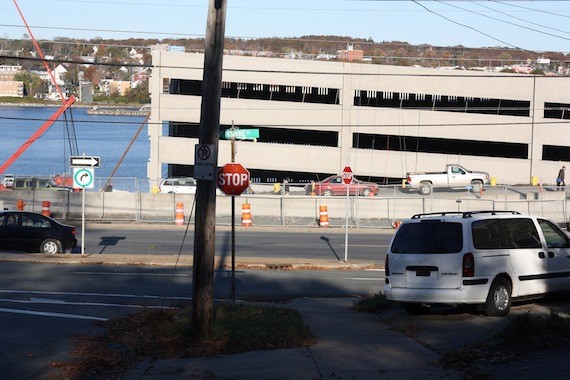 The new parking garage for the Irving Shipyard block views of the harbour from the adjacent north end neighbourhood.

Residents living near the north end waterfront will have to live with a multiple-storey parking garage diminishing their view of the harbour as part of the $300-million Irving shipyard modernization package. Construction on the 520-car garage will be completed by early 2014, says Deborah Page, spokesperson for Irving Shipbuilding.

“The parking garage will not accommodate the entire Halifax Shipyard workforce, especially once the workforce begins to grow again in 2015 with the beginning of production of the first set of Navy combat vessels, the Arctic Offshore Patrol Ships,” she writes in an email. Page says Irving is working with HRM in its “SmartTrip initiative” to establish carpool groups and subsidize bus passes.

Glen Ward owns a north end property dating to 1919 known as the Clearview Cottage. “After 94 years, we no longer have a clear view,” he says of the Irving parking garage that now blocks the waterfront at the bottom of Russell Street.

Councillor Jennifer Watts says Irving Shipyard is zoned as C-5, Harbour Related Industrial, which does not have a “building height, size or sighting restriction." Though the zoning does not explicitly provide for garages, the city determined it to be “an accessory use” to the kinds of construction permitted.

“It would have been nice if they consulted with the neighbourhood or designed it so as not to completely take over the skyline at the bottom of Russell Street,” Ward says. “I'm raising my family here and I'm disappointed we're looking at a cement wall instead of sunrise on the harbour.”

Ward and other residents claim workers who visited the neighbourhood last spring to videotape the condition of homes before blasting began said the garage would not be higher than street level.

Page responded that Irving was “not aware of any such erroneous comments made by individual shipyard or contractor employees, nor would they be authorized to make such comments.”

“We are making every effort to provide advance notification of activities that may impact [residents], such as underwater blasting, dynamic compaction and 24-hour work accompanying demolition and construction,” she says.