May Ocean's notice of appeal 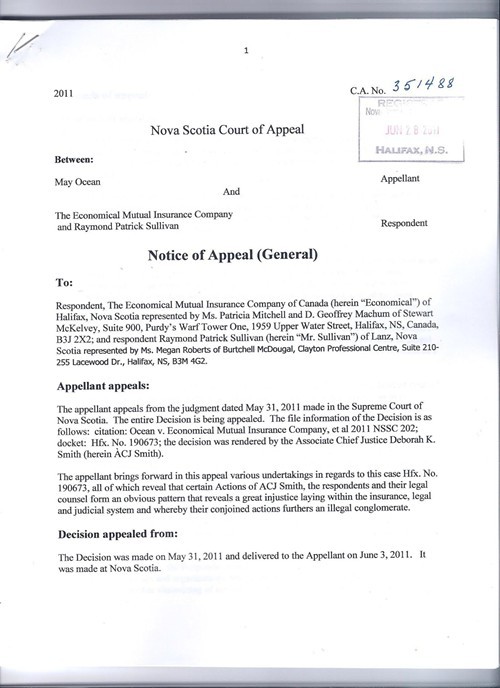 Nova Scotia pewter artist May Ocean is seeking to appeal a recent Nova Scotia Supreme Court ruling that found her partly to blame for a two-car collision near Whites Lake, about 25 kilometres south of Halifax. Ocean’s notice of appeal, filed on June 28, is the latest twist in a decade-long legal battle that was the subject of a Coast cover story in 2009. Ocean is asking Nova Scotia’s Court of Appeal to overturn the lower-court ruling and declare Raymond Patrick Sullivan fully to blame for the accident which wrecked their two cars and injured both of them.

During a 25-day trial last fall, an accident reconstruction expert testified that Ocean had no way of avoiding the collision which happened after Sullivan came barrelling around a curve 110 metres (about 350 feet) from where she had already pulled onto the highway. Even though Sullivan slammed on his brakes, the expert testified his speed at impact was likely around 91 kilometres-per-hour in a 70 kph zone.

In her ruling released on June 1, Supreme Court judge Deborah Smith accepted the expert’s findings. However, she found that Ocean contributed to the accident by choosing to pull out of a store parking lot at a spot which gave both drivers less time to avoid the collision. She assigned Ocean 20 percent of the blame ruling that Sullivan’s excessive speed made him 80 percent responsible.