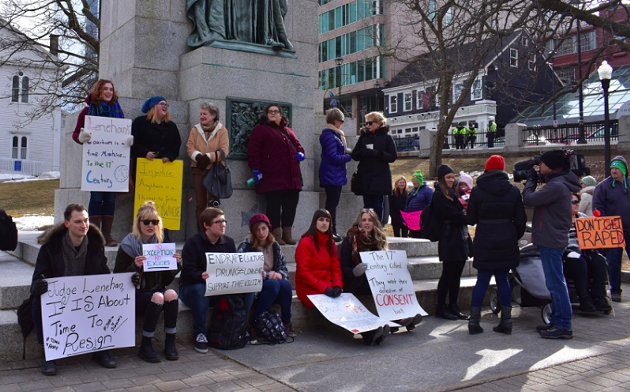 THE COAST
Members of the public gathered to protest judge Lenehan's acquittal of Bassam Al-Rawi last year at Grand Parade.
The Halifax taxi driver acquitted on all charges of sexually assaulting an intoxicated passenger in the back of his cab will face a new trial.

A decision released Wednesday by the Nova Scotia Court of Appeal found that Judge Gregory Lenehan “misdirected himself as to the legal meaning of consent” in his ruling last March.

“The trial judge ignored or disregarded a substantial body of circumstantial evidence that would permit an inference to be drawn that either the complainant did not voluntarily agree to engage in sexual activity with the respondent or lacked the capacity to do so,” writes Justice Duncan Beveridge in today’s decision.

Lenehan found cab driver Bassam al-Rawi not guilty on all charges, saying the Crown failed to prove the alleged victim had not consented to sexual activity.

The case made national news and catalysed both from the legal profession and public outcry when Lenehan stated in his ruling the now-notorious phrase that “Clearly, a drunk can consent.”

The appeal court agreed with the Crown that Lenehan’s infamous statement was not incorrect from a legal definition, but the judge erred by assuming someone would have to be unconscious to be in an incapacitated state.

“By this logic, the complainant miraculously became unconscious the instant the police showed up, but in the time leading up to their arrival, she somehow had the capacity to appreciate the nature and quality of the sexual activity,” writes Beveridge. “Even if consciousness were the litmus test, there was ample evidence, ignored or disregarded by the trial judge, supporting a reasonable inference she was insensate for some time before police .”

The complainant in the case was found unconscious by a police officer in the back of al-Rawi’s taxi, undressed from the waist down. The officer testified that she observed al-Rawi leaning over between the passenger’s propped-up legs, and noted his pants were partially undone. The cab driver also tried to hide the complainant’s urine-soaked pants as police approached the cab.

Before getting in the taxi, the passenger had been drinking heavily downtown. Upon being roused by police, she didn’t know where she was or what was happening.

Beveridge finds Lenehan entirely discounted this “substantial body of circumstantial evidence” regarding a lack of consent in his ruling.

“On this ground alone, the Crown is entitled to a new trial.”

“Anyone who took the time to read the whole of the judge’s reason would recognize how he agonized over the and rendered what was obviously a very reluctant acquittal,” Saunders writes.

“One hopes that the outcry which greeted the release of the judge’s decision will not cause him or his judicial colleagues to be cowed in the way they decide the matters that come before them, and that they will continue to judge with the courage, independence and impartiality, their oath and our law demand.”

Lenehan’s ruling is overturned, and another judge will preside over the new trial. But the question of how consent is legally interpreted, in all of its granular, nuanced complexities remains, especially when drinking is involved.

Elaine Craig, an associate professor of law at Dalhousie University who studied the al-Rawi case in her soon to be released , says the handling of this case has injured public trust.

“The wasted judicial resources and the cost to the public’s faith in the ability of our legal system to respond appropriately to allegations of sexual assault – neither of which should have occurred in this case given the evidence– cannot be recouped.”