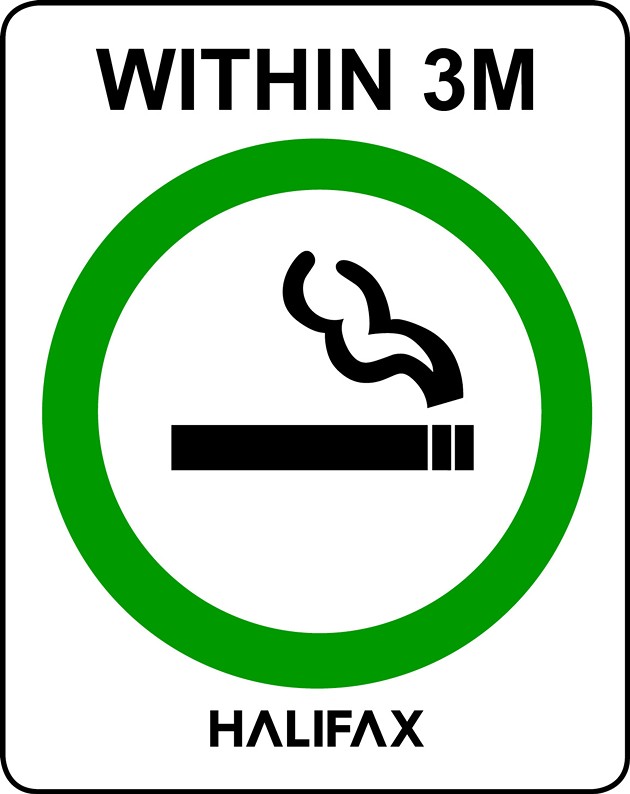 VIA HRM
Stay within the green.

You’ve got two more weeks to light up on public property.

A “couple dozen” smoking areas will initially be in place come October 15, just two days before cannabis is legal.

“We suspect that a good number, a couple dozen to three dozen, will be up and operational by the 15,” says spokesperson Brendan Elliott.

Those locations will be identified via signs like the above prototype, though the suggested safe distance of three-metres will fluctuate.

Locations already decided on include the bus terminals in Burnside, Clayton Park and Dartmouth. Those are the “easy ones,” says Elliott, as HRM already has direct control of the land's use.

An online map to be posted in the next few days will show all approved locations and update as new sites are chosen. Meanwhile, residents can submit requests for specific smoking locations to a dedicated email address (TBD).

Elliott says city staff will also be monitoring the discourse on social media, should the public have suggestions.

“This is something that’s organic. It’ll grow as we get our feet on the ground with this legislation.”

The bylaw amendments—which have been loudly criticized by residents and councillors as totalitarian, unenforceable and ripe for abuse—will level fines ranging from $20 to $2,000 on smokers outside the safety zones.

City hall had originally hoped the signage could be in place for October 1, allowing a two-week adjustment period before cannabis is legal. That self-imposed deadline was “too ambitious,” admits Elliott.

Implementing these changes has been challenging, says the spokesperson, in so far as it's the first time HRM has ever had to do something like this.

“If I can describe government as being nimble, this is one of those cases where we’re absolutely going to have to be flexible in how we apply the amendments that council has given us.”

The smoking bylaw’s second reading comes to council for final approval on Tuesday. Unlike changes to land-use bylaws, these amendments to the nuisance act don't require a public hearing before being enacted.