Clarification, February 11: Elizabeth Herrit's lawyer, Larry Graham, called The Coast Friday to return a Coast call made late Thursday afternoon. That is, he did not initiate the conversation. That should've been made more clear in the article.

The saga of Peter Kelly and Mary Thibeault continues.

In September, a judge removed Kelly as executor of Thibeault's estate and ordered the then-mayor to produce an accounting of the estate for the new executor. Now, it looks like that new executor intends to object to Kelly's accounting of the estate, and will ask the court to fine Kelly personally for his "misconduct, neglect and default" while managing the estate. A hearing on the matter is scheduled for February 19.

Thibeault died in 2004. In her will, she named Kelly as executor, charged with dispersing her estate to 18 heirs, one of whom was Kelly himself. Kelly failed to discharge those duties in multiple ways, but most problematically, after Thibeault died, Kelly removed over $160,000 from Thibeault's personal bank account, transferring the money to himself and and his son. Kelly then filed an inventory of Thibeault's property at the time of her death with the the court. That inventory failed to account for the money he had subsequently removed.

Last year, after The Coast published its investigation of Kelly's failures, several of the other heirs petitioned the court to have Kelly removed as executor. In September, Nova Scotia Supreme Court Justice Peter Rosinsk agreed to remove Kelly, and appointed another heir, Elizabeth Herritt, as executor. Rosinsk ordered Kelly to give Herritt a complete accounting of the estate by October 1.

Kelly met that deadline. The accounting he gave Herritt showed that two weeks after The Coast's investigative piece was published, Kelly paid $145,000 back into the estate. He also billed the estate for extensive legal fees he had incurred, as well as significant fees for late payment of taxes.

The court hearing scheduled for February 19 is to determine the legitimacy of Kelly's accounting of the estate.

Documents placed in the public court file this week show that Herritt intends to contest Kelly's accounting, saying the estate should not have been billed for the late fees, nor for the legal costs that Kelly ran up to defend himself against the other heirs, not the heirs' legal costs. And Herritt makes the additional demand that Kelly pay interest on $145,000 of the money he had removed from, then returned to, the estate.

The Coast reviewed two sets of documents this week. One was a November correspondence between Herritt's lawyer, Larry Graham, and court administrator Cora Jacquemin, in which Graham spells out Herritt's objections to Kelly's accounting. Another set of documents relates to a $50,000 payment Kelly made from the estate to the Salvation Army last year.

Regardless, the correspondence between Graham and Jacquemin contains a "draft" Form 42, "Notice of Objection to Accounts," written by Herritt, and further explication by Graham.

The documents show that Herritt intends to object to Kelly's accounting of the estate on several grounds, including:

• "The absence of documentation, such as invoices and receipts, to support certain expenditures listed in the accounts."
• The overpayment of accountant and proctor fees.
• Charging the estate for the lawyer fees Herrit and other heirs incurred in order to get Kelly removed as executor and while "seeking the return of funds inappropriately transferred to the accounts of the personal representative [Kelly] in his personal capacity and to the accounts of members of his family."
• An overpayment of income taxes on the estate because Kelly had failed to take a charitable exemption that would have been available had he promptly paid the charities named in Thibeault's will.
• Payments of rent and other expenses related to a mobile home Thibeault owned in Florida, as the expenses increased because of Kelly's delay in settling the estate.
• Kelly's lawyer bills that were paid by the estate "to the extent that [the] amount includes personal services for Mr. Kelly and services to address or rectify his mismanagement of the estate."

But besides objecting to Kelly's accounting, the documents show that Herritt intends to ask the court to "inquire into and adjudicate upon the misconduct, neglect and default" on Kelly's part, and "order that [Kelly] pay to the estate that sum of money" to correct the incorrect accounting. She also asks the court to compensate the charities named in Thibeault's will for the interest income they've lost from Kelly's delay in settling the account.

The objections spelled out in the documents are extensive, but it is important to note that the objections were still in draft form and are not an official request for action from the court. No judge or administrator has ruled on the objections.

Still, the seriousness of Herritt's objections comes through in an email Graham sent to Jacquemin. "I will be including case references in the [final] brief, especially cases relating to relief for 'wasting' of the estate by a personal representative," Graham tells the court administrator, clearly implying that, as executor, Kelly has "wasted" a significant part of the estate.

Friday afternoon, Graham called The Coast to say that "we will have news Monday, or Tuesday at the latest." [See clarification above]

The court record now includes a copy of a $50,000 cheque that Kelly wrote to the Salvation Army. That cheque was dated February 20, 2012, four days after our article appeared. 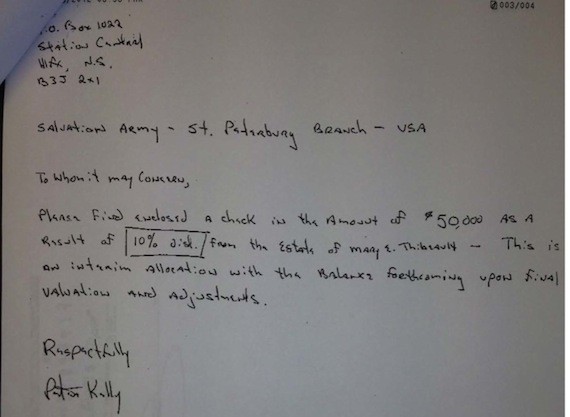 While the cheque was dated February 20, 2012, The Salvation Army said in a letter to the Probate Court that it didn't receive the cheque until "May of 2012."

In that letter to the Probate Court, dated October 5, 2012, Sharron Crosby, the director of the Salvation Army's legal department, says that Kelly's letter—received more than seven years after Thibeault had died—"was the first knowledge we had of TSA's interest in the Thibeault estate."

Crosby went on to say she needed more information before she could properly process the money.

To that end, "My office prepared and sent a letter to Mr. Kelly on May 29, 2012, to which there has been no response. The St. Petersburg Area Command sent him letters on July 9 and August 17, 2012, with the same outcome: no response."

"I Googled the Halifax Probate Court's office," continues Crosby's letter, "and found links to a blog and a news article about Peter Kelly and the Thibeault Estate. I presume that explains the reason he didn't respond to TSA's inquiries."

The lack of contact from Kelly presented the organization with real problems, wrote Crosby.

"We have yet to receive a copy of Mary Thibeault's will, or any court pleadings, even though she died in 2004," Crosby explained. "We greatly appreciate the check but, unfortunately, the funds can not be used because we do not know the donor's intent for the gift."

By that time, nearly eight years had passed since Thibeault's death, but not a penny of her generous gift to the Salvation Army of a tenth of her estate—which could be as much as $65,000—had been used for charitable purposes.