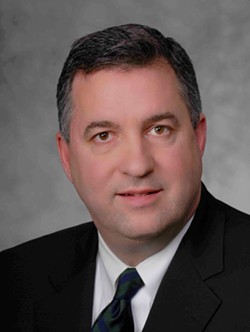 HRM CAO Richard Butts
I was kicked out of a city meeting Tuesday. I had heard that Waye Mason was going to address the Stadium Committee, so I wanted to hear what he had to say, and what the committee members were thinking.

In typical backwards fashion, the city is trying to wedge a business model into a stadium to be built for a FIFA soccer bid, rather than first finding business model that works and then wedging an occasional large event into *that*. The rumour mill is that Huskie Stadium is too small for the regulation FIFA soccer field being proposed, which necessarily jumps the stadium proposal from “add some bleachers to Huskie Stadium” to “build a gazillion dollar new stadium.” Also, since FIFA is embroiled in scandalous controversy involving bribery from bid cities, I wondered if the committee was thinking maybe it’s not a great idea to deal with alleged crooks.