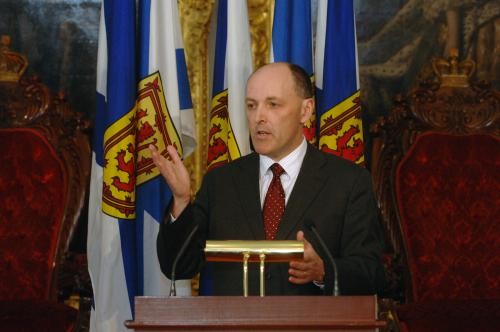 Nova Scotia’s finance minister strode to the lectern to begin his budget news conference at Province House today and fished out a pair of children’s running shoes. Bathed in the glare of flashbulbs, Graham Steele explained that the NDP government was eliminating the provincial portion of the sales tax on children’s shoes and clothing as well as on diapers and women’s menstrual products.

The photo-op appeared to be designed to soften the news that effective July 1st, the province will raise the HST on most other things by two points to 15 percent, the highest combined sales tax in the country. The increase will cost the average Nova Scotia family an extra $529 a year and will generate $215 million for the provincial treasury this year and $300 million per year after that. However, the province will be returning $53 million this year and $70 million next year, mainly to families with incomes under $30,000. The sales tax rebate will be worth about $240 per household plus $57 per dependent child.

“The one hand taketh, the other returneth” was characteristic of at least one other tax change in Steele’s first major budget. Starting on January 1st, Nova Scotians earning more than $150,000 will be taxed at a marginal rate of 21 percent, up from the current top provincial rate of 17.5 percent. The tax will raise $59 million in the coming year, but will be eliminated once the budget is balanced. On the other hand, the province is suspending its high-income surtax on annual incomes over about $83,000 saving 30,000 better-off Nova Scotians a total of $27 million in personal income taxes.

There will also be income tax reductions for low-income pensioners, small businesses and large corporations while 15,000 welfare recipients will quality for a $200 annual poverty reduction credit.

Steele insists that although his tax increases will help slay the deficit, most of the money needed for balancing the budget over the next four years will come from $772 million in spending cuts. He acknowledges though that it will be tough to cut high cost, “big-ticket items” such as health and education partly because much of the money is spent by outside agencies. (In fact, more than 60 percent of provincial spending involves payments to bodies such as municipalities, health authorities, universities and school boards.)

“The simple fact is these are not things you can snap your fingers and do overnight,” Steele said referring to the problems inherent in controlling spending. “We’ve got to sit down with our partners and say, ‘we’ve got to do this better.’” One of his budget documents suggests that ways of reducing health care costs, for example, could include investigating “shared efficiencies” among health authorities; “streamlining health-care services” and reducing drug costs.

Both opposition leaders suggested that the NDP budget relied too heavily on specific tax increases while being vague about spending reductions.

Liberal leader Stephen McNeil criticized the government for not reining in spending. “This government is talking about tough decisions lying ahead,” McNeil said. "Quite frankly, they picked the easy one, and that was raising taxes.”

Conservative leader Karen Casey suggested that raising sales taxes on the one hand, while refunding the tax to poorer families on the other, made little sense. “I can’t support an HST increase at the expense of Nova Scotians,” she added.