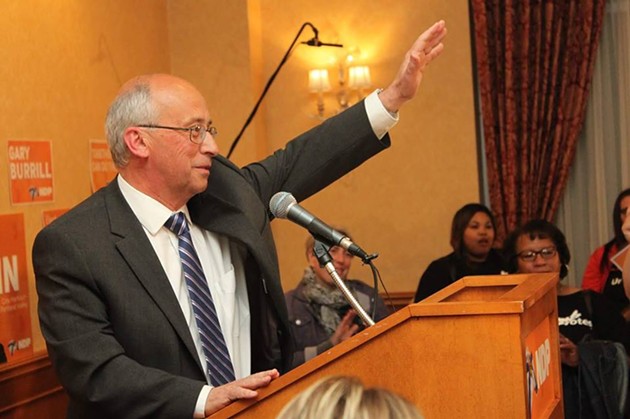 VIA FACEBOOK
“Certainly I regret to think that anyone in our party would hold that view of me,” says Gary Burrill about comments on his character.
Call it a war of the oranges.

Nova Scotia NDP president Bill Matheson and vice-president Judy Swift have both stepped down from their positions with the Party’s executive.

The resignations happened at a meeting this past Saturday. In an email subsequently sent to the NDP’s provincial council, Swift blames her departure on the actions and attitude of leader Gary Burrill.

A copy of the email shared with The Coast criticizes Burrill’s “judgment, his fiscal prudence, his understanding of and respect for the Party’s processes and his over-reliance on the opinions of a small group of loyalists.”

Although she strongly believes in the party’s direction, its caucus and “an exceptional group of MLAs,” Swift writes that she no longer has confidence in their leader.

“His focus on what he believes to be a ‘mission’—which might otherwise be a good characteristic—has become a liability which blinds him to his own shortcomings and hypocrisy,” she writes. “It has led him to inhabit a Trump-like world of alternate facts.”

Swift was unable to be reached for comment. Matheson declined to provide any additional comment other than confirming he had resigned.

In a phone interview Monday evening, Burrill tells The Coast that “serious disagreement and debate” are a vital part of how the NDP operates.

He only has kind words for the former executives, even if he does disagree with some of the criticisms of his character.

“It is a very serious impugning of character and motivation, in her view of me,” he says of Swift’s Donald Trump comparison. “It is not a view I her. I think she dedicates a great deal of herself to our party and I’m one of many people who appreciate it.”

A former MLA for the riding of Colchester–Musquodoboit Valley, Burrill ran a successful campaign for the Party leadership in February 2016. He was without a seat at Province House until this past May’s election, when he unseated Joachim Stroink for Halifax Chebucto.

In her email, Swift writes that she and Matheson spent the past 18 months effectively working as unpaid office staff while money needed for party support went to Burrill’s operations. The former vice-president states that she spent “countless stress-filled hours” on tasks she never thought she would have to deal with, and “many sleepless nights” worrying about the physical and mental health of her colleagues.

During the weeks leading up to this month’s annual general meeting, Swift says she and other executives spent unpaid time away from their families in order to be physically present in the Party office.

“These are burdens volunteers should not be asked to bear. But we have been operating in what amounts to crisis mode, as the result of one person’s decisions,” Swift writes. “I would also like to add that we have received neither acknowledgement nor thanks from the leader for these sacrifices.”

David Wallbridge, the co-chair of the NDP’s fundraising committee, was at the executive meeting when Matheson and Swift resigned and defends Burrill’s leadership. He says he’s surprised at the language in the vice-president’s email.

“I guess, for me personally, it [was] the exact opposite of what my experience has been,” says Wallbridge. “The comparison to our friends south-of-the-border and their president right now totally over-the-top and as far as I can tell really uncalled for. It’s unfortunate.”

The executive and its various standing committees govern the Party in between quarterly meetings of the larger provincial council. Wallbridge is himself a past president from before Burrill’s reign. He downplays the conflict allegations made by Swift and says any problems with the Party’s leadership are isolated to the two resigning members

“I would say that since Gary got elected, people in the party are feeling a lot more positive.”

But Swift and Matheson aren’t the only high-level members of the NDP executive to leave in recent weeks. Secretary Mike Poworoznyk resigned earlier this month after nearly four years in the role. He was unable to be reached for comment.

Another member of the executive is also backing-up Swift’s accusation that Burrill rewards personal loyalty over competence. Speaking on condition of anonymity, they say that the NDP leader has little regard for anyone except a small choir of devoted followers.

“Gary may act like he is a man of the people, but he has a very different side of him that only a few are allowed to see,” the executive says over email. “In the end, everything he does is about him and his agenda.”

Burrill says it’s a hard assessment for him to stomach.

“Anybody offering leadership of any kind would feel great regret to hear such an opinion expressed of them by anyone in their party,” he says. “Certainly I regret to think that anyone in our party would hold that view of me.”

The NDP’s provincial council will elect an interim president and vice-president at its next meeting in January.