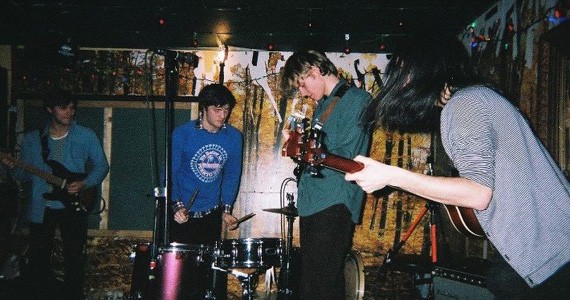 In a town of this size, it's common for bands to share multiple partners. Nap Eyes is no exception.

"I think we have the habit of just a lot of our bands sharing members," says drummer Seamus Dalton, whose Nap Eyes mate, Josh Salter, also happens to front Quivers. "We're pretty incestuous, you could say."

On Tuesday, Quivers and Nap Eyes will release a split cassette at the Khyber with a performance from Old & Weird, a cake walk and both kissing and photo booths. The romantic atmosphere hopes to soothe the heartache of Quivers' last show. The split cassette captures one band's farewell and the other's free-spirited introduction.

Nap Eyes began this past summer the way a lot of bands do---formed from the flames of previous bands playing around town, Dalton and Salter met up with Brad Loughead and songwriter Nigel Chapman, starting a torrid love affair with mellow, melodic pop.

The group's summer lovin' happened so fast that in no time they had recorded four songs for their first release. But after listening closely to the takes, Chapman was unhappy with their quality and decided to scrap the album and record four brand new songs.

Released online last November, Nap Eyes' self-titled cassette shows the excitement and spontaneity of a band in their honeymoon phase.

"Nigel had the idea that he wanted to do it just all live off the floor. He didn't want to do any overdubs or anything and I think you can hear that in the songs. In each song one of us is making a mistake for sure," he says.

Recorded in just one solid take, the songs give a sense of urgency and power to their sweet pop, which Dalton attributes to their thoughtful front man.

"He's just a musical genius in the purest sense. I don't think he's trying to emulate anything. I think he's just Nigel," he says. "Everything he makes is just perfect bliss." -