The interior designer behind Bricks + Birches takes you on a tour of her stylish Kentville home. 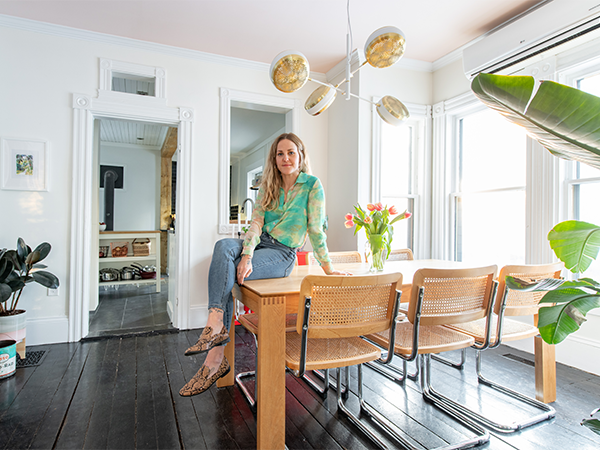 RYAN WILLIAMS
The dining room is the heart of Robyn Manning's home, with great light and sight lines to other rooms.

Robyn Manning's interior design company, Bricks + Birches, is having a moment. "Things are rocking," says Manning, "starting to really snowball." Where she started out doing residential projects—a lot of cottages on Nova Scotia's rustic north shore or homes for young families in the city, hence the B+B name blending urban and rural—now, coming up on the business's four-year anniversary this May, B+B's reputation extends to commercial spaces, too.

RYAN WILLIAMS
The colours in this painting by Manning's friend Derek Lewis happen to tie the kitchen, dining room and living room together, even though "the painting came first, the space came second."
Manning brought a second designer, Marissa Buckley, into the company in 2018, and is planning to hire a third member of the team in 2020. Last year, B+B finished a major project for Luminate in Bedford—a combination retail space and health clinic—and is currently working on overhauling a hotel restaurant in downtown Halifax.

In balancing different types of projects, Manning approaches each one on its own terms, not trying to impose her own style. "My whole philosophy behind the business since day one has been not necessarily about a consistency of one aesthetic, but a consistency of quality," she says. This is on display in her own home, in Kentville. While a lot of her residential clients are going for neutral, sophisticated colour palettes, Manning's house is vibrantly colourful, "very indicative of my art school background." 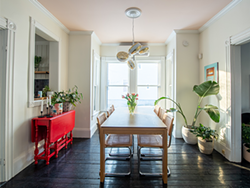 RYAN WILLIAMS
The red table at left and its potted plant remind Manning of her grandfather, mother and father: "There's quite a bit sentimental value in that one vignette."
From floor to ceiling, Manning's dining room is special. The dark-stained wood floors are original to the nearly 100-year-old house. "No plank is the same width or the same length," says Manning. "They're very much historic when you look at them." If you step on one board the right way, it pops up to reveal a little hiding place—Manning dates the house thanks to an ancient newspaper that was found in there. And if you look up, you'll see the pink ceiling. "Everyone defaults to painting their ceilings white, but it's just another surface that you can treat a different way, whether colour or wallpaper," Manning says. "It's just this touch of the unexpected, but not necessarily in your immediate sight line."

"The dining room is the heart of the home. My living room's off of that, my kitchen is off of that and to me all of those sight lines were very considered, how they all work together." The dining room also has the best light, "so all my plants thrive," says Manning. "I have a red accent table in that room, that doesn't really look like much," she says. But the table is the only piece of furniture Manning inherited from her grandfather, and her father painted it red. Plus the plant sitting on the table is in a pot from her late mother. "So there's a nice family connection to that one piece." 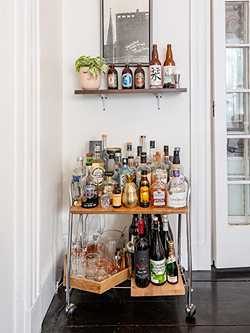 RYAN WILLIAMS
The vintage Neptune Theatre poster above the bar is another reminder of Manning's mother.
"If you saw the bar, you would think that we're quite heavy drinkers," Manning laughs. "But I find that there's a lot of beauty in everyday objects. A lot of the alcohol that we have collected are either from our travels or they're from local companies, and I think those are beautiful everyday objects so they're really for display just as much as they are for enjoyment." Above the bar is a vintage Neptune Theatre poster, another reminder of Manning's mom, who worked at Neptune in the '70s. A painting by friend and tattoo artist Derek Lewis hangs on the wall nearby. The futuristic light fixture is a different kind of happy memory: It was on sale for $32, but the original price tag said $500. Even professional designers love a great deal.