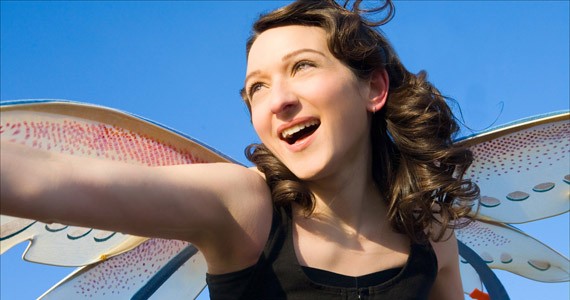 Experimental pop sounds and an astounding live show await you.

Shara Worden has no shortage of musical training. A multi instrumentalist as a child, Worden went on to study opera at the University of North Texas. However, it was when she branched out from her formal studies, learning to play guitar and penning lyrics, that her career began to blossom.

"Doing classical music in my own way was not a career path anyone told me about," she says.

For the past seven years, Worden has been making music that dances between pop, folk and jazz as My Brightest Diamond. On her 2011 release, All Things Will Unwind, the clear bell of Worden's voice is backed by chamber ensemble yMusic. Weaving in threads of Tori Amos and Björk, Worden's style is fresh and theatrical, reflected in the way she bursts from swaths of colourful faux fur on her album cover. Worden's songwriting was affected by two recent, major changes in her life: the birth of her son and a move from New York to Detroit. "I used the idea of opposition to create the songs," she says. "I feel life is full of contradiction, and my life has been full of a lot of extreme emotions and observations. I had a child and felt very joyful, but at the same time the world is under great stress, Detroit is under great stress." Her new compositions, as a result, reference both lullabies and protest songs.

Collaboration has always factored into Worden's work, and her experiences in this area are multiple and diverse. She has been one of Sufjan Stevens' Illinoisemakers, joined forces with visual and performance artists, written scores for several off-Broadway productions and worked with filmmaker Matthew Barney.

"Collaboration is about finding new ways for the forms to interact with one another," Worden says. "It makes me uncomfortable, and I like that challenge. I always learn something about how another artist deals with their work and their situation." Haligonians can catch her collaborative skills in action, as she'll also be appearing at the Jazz Fest with Clogs, lead by Padma Newsome, under whom Worden once studied composition.

Early in her career, a poet suggested she limit the use of the pronoun "I," and Worden continues to live this advice. "When I'm the composer and band leader, I'm the boss, but sometimes it's helpful to change roles. To not be the boss all the time." --JF