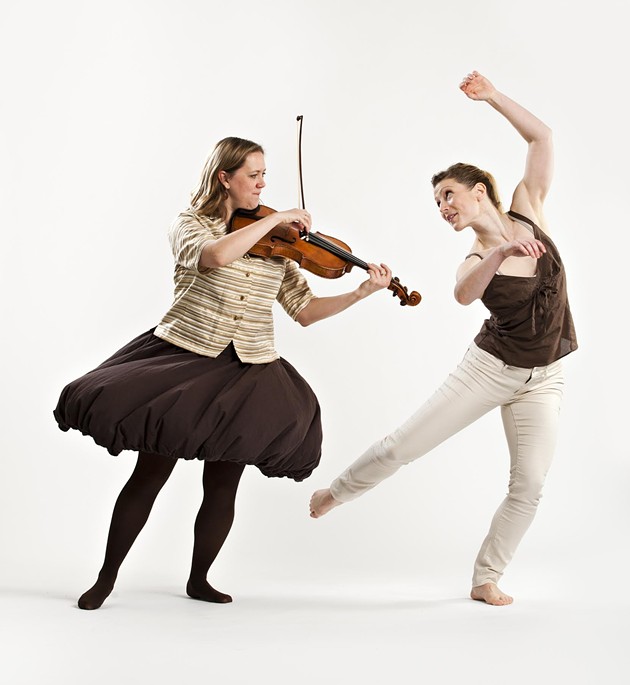 The tangibility of music, and its uncanny power to move us, was made manifest last night in Speaking in Ligeti, a production by choreographer Martha Carter, presented by Live Art Dance as part of the Scotia Festival of Music.

Set to the music of Hungarian composer György Ligeti, the work brought the musicians of Microcosmos String Quartet onstage to become part of the choreography, along with talented dancers Hayden Fong, Delphine Leroux, Nicholas Lydiate and Thoenn Glover. The result was a fascinating demonstration of the relationship between music and movement.

The music took on its own physicality in this piece, filling the space between musician and dancer with a palpable force, as though the strings of Microcosmos’ instruments were extended and tied to the dancers’ limbs. This was taken to the extreme sometimes, with musicians playing tyrants to the dancers, pulling them this way and that, with the dancers left to marvel at the seemingly supernatural power of these wizards’ instruments.

The dancers were impressively nimble, and, despite the unnerving and eerie quality of Ligeti’s music, had the audience laughing at times, and always enthralled.

The only misstep in this almost flawless production was its use of audiovisual elements. Video and recorded sounds were hesitantly deployed here and there, and their purpose was not immediately apparent. The work is so strong and so cohesive without them that they serve only to clutter things up.

Speaking in Ligeti was performed to a packed Sir James Dunn Theatre last night, and it repeats tonight at 7pm. The Scotia Festival of Music runs until June 7.