Mural of the story

Brenna Lord's EN-TRAILS exhibit has hidden faces that stare back. 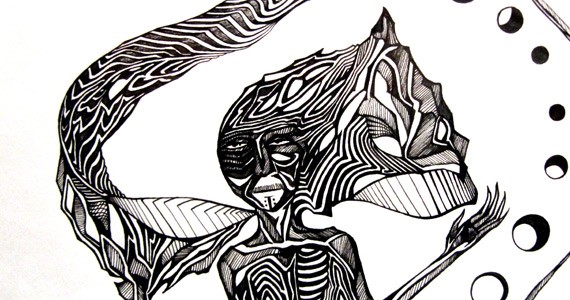 Brenna Lord's EN-TRAILS mural is on exhibit at Plan-B.

Brenna Lord's EN-TRAILS exhibit stares back. Hidden faces in Lord's wall-spanning mural, now on display at Plan B's B-Side Art Gallery, inspire appreciative double-takes. Somewhere between Alex Grey's luminiscent energy-bodies and Frank Miller's pulp-noir impressions, Lord's episodes form a mercurial whole. A faery in the mural could have dropped her wings in black ink and dragged them across the gallery's white walls. The vision she inhabits flows from the open palm of an alien silhouette. The smoky curvature of the mural is an illusion act; on the third wall a giant face with two eyes materializes: one pupil a beast, the other a cabin in the woods. Non-temporal creatures witness moon phases, ragged figures blend the biological, architectural and organic like elemental sprites trapped inside the cosmic musculature. An open sketchbook with a labyrinthine drawing lies open on a gallery table, a startingly casual touch. Type-written text details cryptic sequences above sketches of people with permeable skin and visible internal geometry. Another sketch captures the minimalist dread of laughter on the rooftop a few seconds before the world ends.