Muppet magic at the Shoe Shop

It's time to get things started for the Muppet Art Show 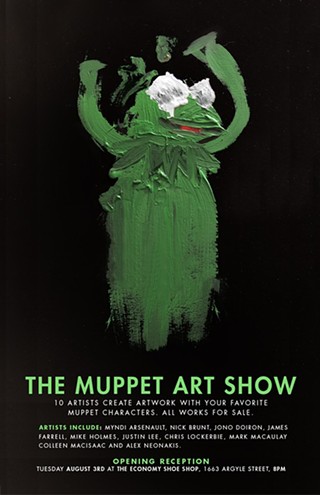 Why are there so many songs about rainbows and so little art with Muppets? Well, it’s time to light the lights because The Muppet Art Show opens Tuesday night, 8pm at the Economy Shoe Shop. Ten artists offer up their own interpretations of the beloved characters, in a variety of media.

The show came about after Seahorse Tavern booker Troy Arsenault approached painter Jono Doiron to do a solo show upstairs at the restaurant. Busy Doiron suggested a group show with his fellow artists in the Paragon Collective—-a group of artists who usually show at The Paragon Theatre (eight of the 10 at the Shoe Shop are part of the collective). Justin Lee came up with the concept, and the rest is google-eyed history. Doiron, who did a portrait of hairy ogre Sweetums—-“he’s kinda scary but kind and benevolent; someone you’d want around in a bar fight”—-has worked with the fuzzy subject before. His pop-painting style lends itself well to the Muppet interpretation, in face, he already had a painting of Grover, styled out as Freddy Krueger from Nightmare on Elm Street.

“It’s the appeal of the childhood nostalgia,” says Doiron. “And there’s a good 40-year fan base. Parents and kids will see this show—-it’s pretty kid friendly.”

Artist and designer Nick Brunt, an Animal fan from way back, isn’t sure what he’ll be showing yet, but his poster for the show is a show-stopper. A gloppy, smeared Kermit on a black background, Brunt says that the frog’s iconic shape was actually a green paint-mixing accident. Other artists in the show include Myndi Arsenault, James Farrell,, Justin Lee, Chris Lockerbie, Mark MacAulay, Colleen MacIsaac, Alex Neonakis and The Coast’s own Muppet rep, Mike Holmes. The show runs until August 29, and all work is for sale.

You may ask yourself, how did I get here?