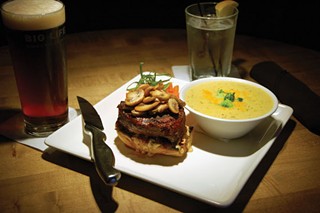 If I were prone to exaggeration, I would say that going to a big-box chain restaurant is the culinary equivalent of being at the bottom of Jame Gumb's well. If someone surreptitiously brought me to a Jack Montana's East Side Pizza-type restaurant, the parking lot would have a trail of claw marks and broken fingernails documenting my attempts to escape the dinner date hell I had stumbled into. I would not put the ketchup in the basket, if you know what I'm saying. So it's not exactly with the highest expectations that I make my way to Moxie's Classic Grill in Dartmouth Crossing.

We're greeted by a group of Little Black Dresses behind the greeting station. The decor is to high-end dining what pleather is to leather---it looks good, but feels cheap and contrived. It's like going to dinner in an episode of CSI: Miami.

An ebullient server quickly delivers our menus. From American fare to dabblings in Indian, Thai, Italian and other fusion cuisine, the lack of focus on the huge, rambling list makes choosing wisely feel like playing pin the tail on the donkey.

We start with the three-dip med bread ($7.99). The garlicky flat bread is crispy and warm, sprinkled with pepper and sprigs of rosemary. The dips are a garlic cream cheese, basil mayonnaise and bruschetta topping. The mayonnaise is really unappealing and bland---the basil can't cut through the fat. The garlic is good, but the cream cheese easily dominates. The bruschetta is nice and fresh, but fails as a dip since it's basically a tiny bowl of diced tomato.

For entrees we settle on the kitsilano chicken sandwich with sweet potato fries ($14.98) and the steak sandwich with broccoli cheese soup. I upgrade to include some sauteed mushrooms with the steak ($15.97).

I order the sandwich medium-rare. The sirloin, which comes back a little closer to medium than I'd like, is perched on top of a half-baguette spread with garlic chipotle aioli and a layer of caramelized onions. The steak is very well-seasoned, delicious with the sweet onions and tender mushrooms. The aioli is a virtual non-entity; my steak had not rested enough and blood has soaked through it, into the bun.

The broccoli cheese soup is thick and gooey, with a sprinkling of fresh cheddar and a few spears of broccoli sinking into it.

The chicken sandwich has a nicely cooked breast stuffed into naan bread with some aged white cheddar, red peppers and asparagus. A tomato basil sauce rounds it out. The red pepper is especially tasty, but sadly the flavour of the asparagus is lost in the mix.

The sweet potato fries are a big disappointment, lacking the sweet vibrancy we expect and have a wilting crispiness. They are awful. Curry mayonnaise gives a punch of flavour, but not enough to save the dish. We leave them uneaten.

We are pleased to see miniature versions of the desserts offered for around half the price of a normal serving. We order the mini sticky toffee pudding ($3.99) and the mini chocolate espresso mousse ($2.99).

The sticky toffee pudding is dense and tasty with a little scoop of French vanilla ice cream to cut through the buttery caramel sauce. The mousse is a callebaut chocolate infused with criollo cocoa beans. It's light and sweet and delicious. The portions are perfect.

While I would still rather spend my hard earned $20 bills eating at locally owned restaurants, the food at Moxie's easily managed to surpass my expectations. Sure, those expectations were set at "torture," but hey, a win is a win!

The Loose Cannon Scottish Public House isn’t about the food