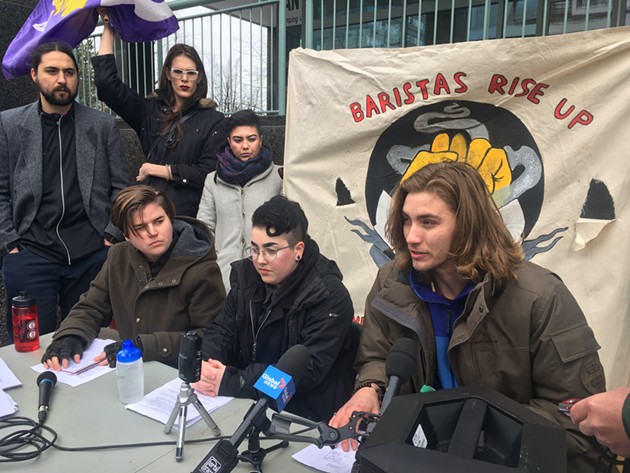 
Over the last couple of years, Kit Singh has quietly become a major operator in the local coffee scene. He bought two Smiling Goat stores then opened two more, and added another pair of cafes to his six-outlet chain by buying and rebranding Halifax’s Just Us! locations. After corporate giants like Tim Hortons, Starbucks and Second Cup, Smiling Goat Organic Espresso Bar is the biggest cafe company in town. But is brewing between Singh and his employees.


Friday afternoon, of four Smiling Goat locations voted on whether to join the Service Employees International Union—SEIU Local 2. (The other two Smiling Goat shops, the former Just Us! locations, are already unionized.) While it can take several days for the vote to be certified, SEIU organizer Darius Mirshahi believes all six locations of the cafe are on the same page.


“We know from talking with each other and the community that’s been built over the last couple of weeks through ongoing meetings and discussions that these workers are united,” Mirshahi said at a press conference Friday. He says there was a 100 percent voter turnout.


The vote took place on the same day company owner Singh is expected to return from vacation. He acquired Smiling Goat from Geoffrey and Andrea Creighton after they declared bankruptcy, officially taking over at the end of January 2016. In April of that year, Singh told The Coast he became attracted to HRM’s business opportunities during a visit from England. At that time, there were two Smiling Goat locations: One on South Park Street and one in Bishop’s Landing.


Since Singh took ownership, Smiling Goat has popped up on the corner of Spring Garden Road and Queen Street. The latest iteration, at Southwest Properties’ landmark MAPLE building on Hollis Street, opened last summer. At the end of August, the company announced it had purchased both the Spring Garden and King’s Wharf locations of Just Us! Coffeehouse. A union for Just Us! staff had been formed a few years earlier, and the union remained in place for those two particular cafes. Singh intends to open another location in May.


This week, while Singh was away, employees at the already unionized

Smiling Goat on Spring Garden and Carlton put out a chalkboard sign stating that paycheques were bouncing and they were relying on tips for income. On Friday afternoon, Smiling Goat staff held a press conference with SEIU, saying they would like to provide further context.

“Our new employer was bound by law to adhere to the terms of our collective agreement, and he signed off on a letter of intent with our union agreeing to be bound by the terms of that collective agreement. He has been in breach of that agreement since November, when our previous health benefits plan elapsed and he failed to set up a new one,” Smiling Goat staffer Charlie Huntley read from a prepared statement. “To date, he has not been paying these workers via direct deposit, which is also in direct violation the collective agreement. Instead, the employer has been using personal cheques to pay employees, many of which have been bouncing. Workers estimate that approximately 45 of these cheques have bounced since September.”


Huntley, who’s worked at the Spring Garden-and-Carlton cafe for five and a half years, explained that while some employees have been paid in full, others have only been paid in part, or not at all.


“The employer has given many excuses, ranging from banking errors to issues with his accountant, to being simply being on vacation and logistically unable to address the issue remotely,” said Huntley. “Until recently, employees were reimbursed for any bounced cheques before the following payday arrived—this was done by way of either a new cheque or through an electronic transfer of funds. However, at this point, two paydays have passed with dozens of bounced cheques and employees owed a significant amount in wages.”


The Coast contacted Singh via email, providing him with details of the allegations made against him. Singh responded, “These allegations are from of staff who have been fired. I think their credibility is questionable.” Asked about bounced cheques, he said, “Some cheques bounced due to a logistical issue BUT were paid by e-transfers and also by cash taken in the stores. To imply that they are ‘living off their tips’ is entirely misleading to the public and your readers.”


According to former and current employees, this isn’t the first time staff members have had paycheques bounce.


“The first time one of my paycheques bounced it was December 22, three days before Christmas. I was confused and irritated but was given a replacement cheque and assured it was a one-time occurrence,” said Emerson Roach at the press conference. They’ve worked at the Spring Garden-and-Carlton cafe for three years. “Since then I’ve had five paycheques bounce, three of which have been ” Roach claims to be owed more than $1,700.


Emily Wilkins, who started working at The Smiling Goat in summer 2017, says only one or two of her paycheques went through without issue. “Every other cheque I had bounced,” she says. “That actually cost me almost $200 in bank fees.”


As Wilkins tells it, she was promoted very quickly by Singh, even though she only worked at the Smiling Goat for a short period of time. She was initially hired as a barista at the Bishop’s Landing cafe. “On my very first shift he promoted me to team lead, and then a couple of shifts in I got promoted to manager,” she says.


“I was managing the Bishop’s Landing location and that was supposed to be the location that I was in charge of but [Singh] had me working everywhere. I worked at every single location and was put in a position of managing every location.”


Wilkins was fired in October, allegedly after Singh was told it was against union rules to have her working at the former Just Us! locations. But he didn’t tell her about her termination verbally or via email. Instead, he simply deleted her from the company’s When I Work scheduling app.


Wilkins says Singh offered her the job back soon after, which she declined. She also alleges she had to fight to receive her final pay. She provided screenshots to The Coast, showing unanswered text messages sent to Singh from October 27 to 30, asking for the money she was due. In November, Wilkins contacted Singh’s wife, Reeta, who told her the finance manager would contact her directly. According to Wilkins, she never heard from the finance manager. So she went to the Nova Scotia Labour Board.


Wilkins estimates she received the last of her pay in January, but Singh “hasn’t paid taxes on anyone’s behalf so, we are still owing money because of him, which is awful.” She is currently preparing a formal complaint to send to the Canada Revenue Agency.


“It’s just so because you leave a job and you want to be done with it—and it’s just haunting you. It’s very stressful,” says Wilkins.


Another former Smiling Goat employee, who asked not to be named, says she currently owes $2,500 to CRA for her 2016 taxes. Like Wilkins, she believes that taxes weren’t remitted on the accounts of any of the Smiling Goat’s staff.


Asked about these claims, Singh says, “Tax remittance matter is CRA matter yours.”


Phoebe Lamb was hired as a barista in May 2017. Like Wilkins, Lamb says she was quickly promoted to team leader. The following September, Lamb was promoted to manager at the South Park location. She corroborates Wilkins’ claim that Singh had a habit of firing people by removing them from the app without a word, and she provided an email to The Coast in which Singh asks her to remove an employee that same way. This kind of behaviour made her anxious if she had to interact with him.

“Whenever I would see [Singh’s] car pull up, my heart would start to beat very quickly. When he would call me, my heart would start to beat very quickly,” says Lamb, who alleges Singh would call her outside of work hours to have her perform work-related tasks—such as using his credit card to pay overdue bills. “He was so irrational that I just never knew what he was going to say to me...if he was gonna tell me there was a huge problem I needed to take care of, if he was gonna ask me to send an email that I didn’t want to send, if he was going to ask me to fire an employee.”


Lamb sent an email of resignation to Singh on October 20. She was diplomatic, she explains, because she wanted to make sure she received her pay. To date, Lamb says she’s received her wages but not her vacation pay. “Definitely I would say the work environment was just an anxious, anxious work environment.”


“It was not a very good experience for us. Let’s just say that,” says Java Blend Coffee Roasters owner Jim Dikaios, who has taken Singh to small claims court for a “fairly sizeable” outstanding amount. “There’s money owed to us.”


Dikaios, who’d been supplying Smiling Goat with coffee since the

’ ownership, says Java Blend’s business relationship with the cafe chain ended when Singh bought the Dartmouth and Halifax Just Us! locations and switched all of his cafes over to Just Us! beans.


“I said, ‘It’s OK, it’s a business thing, we just have to clear up our balance now.' And that was it, we didn’t see another penny.”


Singh says he let go of Java Blend and the unnamed supplier, and “When you switch supplier for different products in exponential growth like we have had, old suppliers don’t like it.” He did not address the issue of unpaid bills.


Lamb forwarded emails to The Coast, indicating unpaid bills from two other suppliers as well as Bell Aliant. The email from Bell Aliant referenced unpaid bills from May to September, totalling $1,236.25. “Bills have been paid,” says Singh. “Logistic errors do happen when you grow from two stores to seven in 18 months where management skills are put to test.”


Singh concluded: “In the past 18 months, we have grown from two stores to six stores, with a seventh to open in May 2018, and currently employ 55 staff to 77 staff. As an immigrant to this land, I have invested in and helped to grow the local economy and grow labour pool, above growth does not happen because of poor business practices.”


The current employees say they’re seeking “payment of the wages owed to them and the resolution of several violations to their collective agreement.” Huntley says the union has filed grievances with the labour board for bounced cheques, lack of health coverage and Singh’s failure to provide records of employment.


“It’s in everyone's best interests here that the workers are paid and the businesses continue to operate and that they operate under the law. This is what everyone wants. This is what the workers want, what the union wants and what any responsible business owner should want,” says Mirshahi of the next steps for the union. “That said if this does not happen, we’ve united these cafes and are willing to fight back if necessary.”


With files from Jacob Boon and Allison Saunders