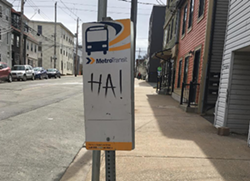 A not-so-serious bus stop, noticed by themaxonlinedotnet on Instagram at the corner of Gottingen and Cornwallis.

An email from the property developer to Halifax Transit and peninsula councillors Jennifer Watts and Waye Mason (CC'd to The Coast) voices concerns about potential plans to remove on-street parking in order to ease transit congestion.

“I have reviewed the new transportation plan for the city and generally agree with its broad direction,” Cantwell writes, “however I am extremely concerned about the priority goal of turning Gottingen Street (between North and downtown) into a freeway for buses.”

As a solution, Halifax Transit is recommending two-way service for Route 1 (which currently travels along Barrington Street when coming off the bridge) and the implementation of new transit priority measures (or TPMs).

Those can take the form of anything from bus-only and “queue-jumping” signals, to the creation of new lanes or even eliminating some on-street parking.

None of those ideas have been selected yet, and Halifax Transit believes it could take several years to implement the complex measures once they are chosen.

But Cantwell—who’s currently developing three Gottingen Street lots of mixed-use and affordable housing —is concerned that removing any parking spaces or creating a new bus-only lanes will make it harder for retail shops to survive.

“Eliminating parking on Gottingen Street will have a negative impact on any plans to create or revitalize retail on this great street and I urge you to not allow this to happen,” writes Cantwell.

A follow-up email to HRM from Ratinaud French Cuisine owner Frederic Tandy echoes those concerns. Tandy writes that he often hears his customers complain about the difficulty in finding parking.

“By reducing the parking (and there is not a lot already), and adding this bus lane you will be slowly killing those small independent business [sic] and all those people who have been working really hard over the years to try and make a got [sic] at it!”

Anecdotal evidence aside, past research has shown that some business owners overestimate the percentage of their customers who drive.

A 2012 study from Dalhousie’s school of planning examined the importance of parking spaces up on Agricola Street for business vitality. It found that walking pedestrians and cyclists visit businesses more frequently and spend more money than drivers.

But that’s not what the business owners believed.

“The results of the business survey show that 53 percent of businesses on Agricola anticipate fewer customers if on-street parking was removed,” reads the study. “While the literature suggests that the removal of parking for other uses, such as bike lanes and/or traffic calming measures, could be good for business vitality many merchants on Agricola still believe that it would have a negative impact.”

To be fair, even the author (who’s now a planner with the City of Calgary) admits this is a limited study, but the results have been replicated elsewhere.

Business owners in the Bronx had complained that the removal of on-street parking for a bus service was killing their businesses, but in fact “sales increased 71 percent over three years.”

The Atlantic’s CityLab has a pretty comprehensive breakdown of other studies looking into the economic impact when on-street parking is removed, though it’s geared mostly towards the installation of bike lanes.

All of which is not to say the north end businesses worried about Gottingen Street are wrong. Even the loss of a single regular customer can be detrimental to a small business owner. They have a right to be nervous about changes.

Cantwell included a study by Washington’s Urban Lands Institute with his email that says “parking is power” in revitalizing retail neighbourhoods. Though the report also notes that improved transit service means parking needs may decline.

“Transit (retailer-sponsored shuttles, bus, light rail, and subway) should be actively promoted by developers, retailers and employers because it reduces parking needs, extends the street’s trade area and brings a greater diversity of demand.”

Back in 2013 the North End Business Association commissioned its own survey about the needs for on-street parking (though the results don’t seem to be up online anywhere).

Councillor Jennifer Watts says she’s already spoken with the NEBA about the possible plans, but stresses that nothing is “set in stone” right now and that there will be numerous consultations with the business community before Halifax Transit decides on any particular TPMs.

Bedford-Halifax ferry idea has new push to float at last

COVID cases and news for Nova Scotia on Monday, Dec 6