No more ordering from Montréal—the restaurant is bringing tagine, couscous and specialty ingredients to the growing north African community in Halifax. 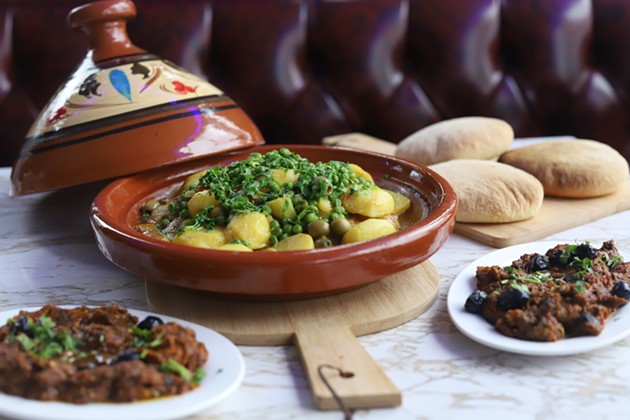 Victoria Walton
Chef Mina Haidaoui's chicken and vegetable tagine with sides of zaalouk hot eggplant salad and khobz bread.
In February 2020, Hani Fagousse and his then business partner opened a restaurant on the Bedford Highway, specializing in Syrian and Iraqi cuisine.

It got off to a great start, but as no one could have predicted, March brought with it the biggest challenge since the 2008 recession.

“The first two weeks was amazing and then after that, as soon as the Premier says listen, you have to shut down, next day you’re making nothing. It was a big hit,” says Fagousse.

With no promised help from the government because of how new the restaurant was, Fagousse’s business partner decided to pull out of the business venture.

“My partner, it was his only stream of income and he put all his investments and stuff in the business, and we had a meeting he’s like listen Hani I won’t be able to do this anymore,” he says.

Since the partner was both operator and chef, Fagousse–who considers himself mainly a businessman—was forced to start dealing in the day-to-day operations of the restaurant, including a rebrand. “Personally, I don’t give up,” he says.

“This time was extremely hard, one of the hardest positions to find is a chef in Nova Scotia. So based on my background, as a Moroccan, I was thinking to switch it to a Moroccan restaurant,” he says.

Meanwhile, in British Columbia, Moroccan-born Mina Haidaoui was considering a move to Halifax.

Although she says she’s not a “trained chef,” self-taught Haidaoui learned how to cook tagine, couscous, and harira soup from her mother in the kitchen growing up.

“I’m self-taught, by cooking for my family. I know I love this. Cooking and baking is my passion,” she says.

After living in Canada for over a decade, Haidaoui had begun volunteering her time and skills cooking for local multicultural organizations and charities.

“I organize events for women, and I volunteer with many multicultural organizations, community kitchen, we cook once a week for refugees. And also I did some volunteering with the organizations that are cooking food for homeless,” she says.

When a mutual friend in the Moroccan community heard that Fagousse was looking for a chef, she knew Haidaoui would be the perfect fit and passed along his number.

“She calls me, says she was wondering about the city, she says I heard about you and this and that," Fagousse says. "And then she said she specializes in desserts and catering and all that. So I said yeah, come to Halifax, maybe we can work together."

Haidaoui brought her husband and children to Halifax this September, and began working with Fagousse, rebranding the restaurant as Moon Light Middle Eastern Cuisine.

Haidaoui says her favourite thing to cook is vegetables. But Moroccan cuisine has a lot of elements.

“We use a lot of spices, we use also a lot of nuts in our cooking or baking,” she explains, while taking the cover off a steaming tagine pot, full of chicken, potatoes, green peas, carrots and green olives. The dish, which takes about an hour to cook, is coloured with saffron and garnished with parsley.

“The heat should be very low and it’s like steaming, the same as when you steam veggies, this is the same concept with tagine. It takes time. I think if you are planning to eat fresh and healthy food you have to plan it,” Haidaoui says.

Fagousse agrees, and says recently he convinced Haidaoui to make some of the dishes he missed most from home, which involve a lot of work.

“It’s not like a burger, it’s more details, more ingredients, so much flavours. And a lot of vegetables, extremely healthy, a lot of things we use are organic,” Fagousse says.

Fagousse wants to educate Haligonians about Moroccan cuisine, since a lot of Moroccan foods like couscous have different interpretations in different countries.

“If you go to Palestine they’ll have something called naftoul, which is a form of couscous. And then the Israeli will have also couscous, but it’s Moroccan originally,” he says. “And now in Canada they use couscous more like salad, but it’s nothing like you tasted in here.”
click to enlarge Haidaoui says it’s especially hard to find some of the ingredients she needs in Halifax. “In Vancouver, I found a not lot multi-ethnic products in Superstore or in Walmart also, but here I didn’t find them,” says the chef.

Thankfully, Moon Light's large space at 264 Bedford Highway, is perfect for the other plans Fagousse has for it: bringing more Moroccan specialty products to Halifax.

“Dining tables we pushed back, then we ordered the merchandise, so we’re serving a Moroccan grocery store,” says Fagousse. “So, people no longer need to bring stuff with them, cases and all that, or travel to Montréal to get the Moroccan stuff.”

Moon Light already stocks several types of tea, couscous and za’atar spice blends, and Fagousse is waiting on the arrival of 200 ceramic tagine pots he ordered.

“Slowly we’re going to change it so as soon as you come in the vibe will be Moroccan,” he says.

Once Covid regulations are reduced, Fagousse also wants to bring back Arab entertainment nights with DJs and belly dancers, a few of which he hosted before the pandemic hit.

“I will definitely continue in that path, more like getting people to know the culture. There’s a couple ways to know the culture, it’s from the media, and then the other side is you see them, you live in it and you judge it yourself,” he says.

Fagousse says that in recent years, the Moroccan community here is increasing, and it’s important for Haligonians to know more about the culture.

“Halifax when I came in, we were about four or five guys,” says Fagousse, who first came here as a student in 2006. But now, “I think there’s at least 200 families in Nova Scotia. And a lot of people, they like it here.”

Dine-in eating is not allowed until at least January 10, but you can order takeout or delivery from Moon Light by calling them at 902-445-3322 or via Uber Eats. Or drop by in person with a mask to browse the Moroccan market, open daily 10am to 9pm.