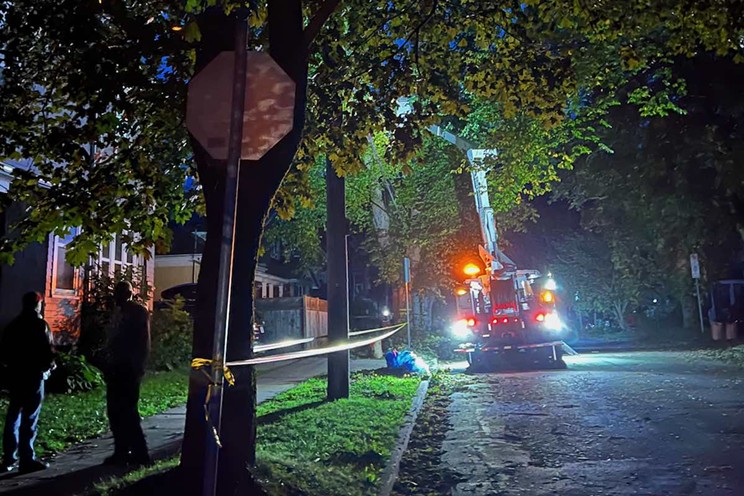 The Coast
Nova Scotia Power is working around the clock—except during thunderstorms—to restore electricity after Hurricane Fiona.

From $100 for spoiled food to $200,000 for major uninsurable losses due to Hurricane Fiona.

In the wee hours of my third morning without power, I hear the loudest crack of lightning and rumble of thunder maybe in my life. We just can’t catch a break.

Later Monday, in an afternoon news conference, Jason Mew of Nova Scotia’s Emergency Management Office says the thunderstorms that rolled across the province this morning delayed recovery efforts for a few hours, but crews are moving “full speed ahead” now. As of 8am Monday, 80% of customers in Halifax have their power back, according to Nova Scotia Power. The rest of us are playing the waiting game for power, wifi or both—including the journalists of Team Coast, who are coming to you from the Halifax Central Library today.

At the post-Hurricane Fiona briefing, Matt Drover of NS Power says over 1,000 workers are on the ground, the electricity monopoly having brought in extra help from elsewhere in Canada and the USA, which is the biggest mobilization in the company’s history. He says Sunday was mostly dedicated to damage assessment using helicopters and drones, and today crews are rebuilding poles and getting wires up. The outages affecting the most people are being prioritized. Mew reminds people to stay off the road so NS Power crews have room to work. Over 100 Canadian military troops are helping clear debris in the province.

Mew says the widespread cellphone and landline failures presented a “challenge” for recovery efforts. Some cell towers are still completely without power, while others are on batteries or generators.

Mew says all fuel stations have power now, and fuel is being delivered to them with priority given to eastern Nova Scotia and Cape Breton. He asks Nova Scotians to avoid unnecessary travel and not to fill up your tank if you don’t need to. He adds to check 511 for road closures.

An 81-year-old man named Larry Smith, who was living on Hennesseys Island off of Lower Prospect, was reported missing Saturday afternoon. On Monday the RCMP called off the search, believing the man was swept out to sea.

Premier Tim Houston opened his Monday afternoon news conference by offering condolences to Smith’s family. He says the province’s current priorities are power restoration, wellness checks and getting displaced people home. According to Houston, approximately 181,000 Nova Scotians are still without power. Fiona’s financial impact isn’t known yet, but he says the cost is higher than previous storms.

Houston announced a swath of government funding for storm relief, totalling to an “unprecedented” $40 million. “I fundamentally believe that the role of government is to be there for Nova Ccotians when they need help the most,” he says. “I made a very personal commitment not to let the province down in this time of need.”

The new financial supports for individuals and families include:

Details on how to apply for the money will be released by the end of the week. Most of the applications will be online.

There’s also a disaster financial assistance program for individuals, municipalities, small businesses and not-for-profit organizations, which covers up to $200,000 in uninsurable losses. Applications for this relief are available online, at Access Nova Scotia centres, MLA offices and municipal offices.