It's as unruly as Lee's films can get, but it's got heart. 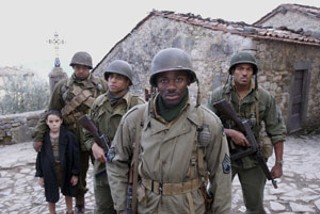 Maybe it seemed unimportant after his masterpiece Do the Right Thing, but Spike Lee's portrayal of Italian Americans in Summer of Sam and Jungle Fever was pathetic. I don't think Lee, who grew up in an Italian part of Brooklyn, was being deliberately reductive, but his cartoon Guidos cheapen those movies' attempts at conversation.

Miracle at St. Anna is as unruly as Lee's movies can often be (the great screen-screed Bamboozled; the misfired She Hate Me). It's in abandoning stereotypes that Lee makes it human. It starts as a film about events and becomes about emotions. Lee acquaints Africans and Italians (the two most frequent ethnicities in his films) as four black soldiers' unit GIs are abandoned by their commander and go behind enemy lines in Tuscany. The soldiers are demoralized, realizing that they're pawns in a white man's war. The Italian settlers they meet have been waiting for Americans to save them from fascism. Neither culture has negative preconceptions of the other, and that unbiased connection is what's at Miracle at St. Anna's heart.

This non-judgmental approach comes despite the familiar bombast of an early battle scene, and Terence Blanchard's wall-to-wall score, which creates a distance in some scenes by underlining that it's all just a movie. Lee keeps too many story threads going at once.

When I saw the film, some of the audience laughed at the sentimentality of the final scene. But if you're following the movie, it's the moment that says it all. When the epic-length Miracle at St. Anna works (at least 70 percent of the time), Spike Lee takes his interest in race relations to a new place.