Lobbyist organization has been handing out cash prizes to students who creating commercials promoting the mining industry, with some help from Nova Scotia's MLAs.

For the past four years, the Mining Association of Nova Scotia (MANS) has been making its way into local schools, encouraging junior high and high school students to create homemade commercials about mining and enlisting political leaders to award cash prizes for the top submissions.

Sean Kirby, MANS’ executive director, says the “Mining Rocks” video contest is one way the lobbyist group tries to “do a better job of explaining ourselves and do a better job offering factual information to the public about the industry.”

“I think it’s been very successful in helping educate young people about the industry and why it matters,” he says. “And we hope, as well, that it’s a good industry potentially for them to go into when they get older.”

Kirby says the contest is completely organized and funded by MANS—independent of any government partnership— the association does enlist the help of local politicians to present the prizes at schools.

The contest awards winning students $1,000 each across five different categories, with additional cash prizes for runner-ups and early bird entries. Cheques were recently given out to student winners by local MLAs, including Labour and Advanced Education minister Labi Kousoulis and Natural Resources minister Margaret Miller (who also served as a judge).

“It’s just sort of a nice community-minded thing that the MLA can do,” says Kirby. “I think it makes it a little more special for the student to have someone prominent in their community help deliver the cheque.” 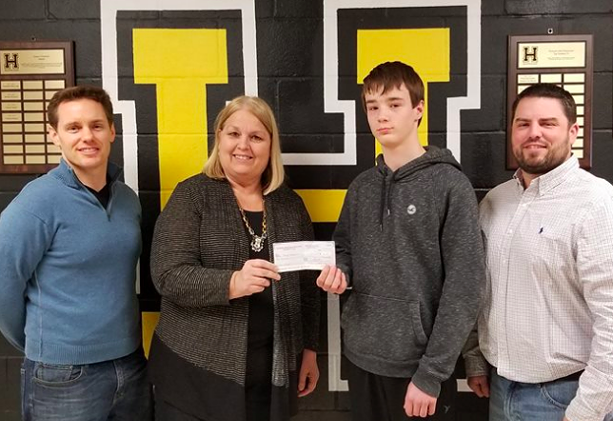 VIA FACEBOOK
Natural Resources minister Margaret Miller hands a cash prize to one of the mining video contest winners.

But NDP MLA Lenore Zann finds it unethical for government representatives to hand out monetary rewards to children for promoting industrial interests.

“Basically patting them on the head and saying, ‘Good job for coming out and being an industry spokesperson,’” she says. “That is not the job of government, and I find that offensive and I find that troubling.”

Zann argues MANS is baiting students to bypass critical thinking in order to create propaganda. It’s brainwashing dressed up as an educational contest, she warns.

“What’s next? Is the fracking industry now going to go schools to get kids to do videos about the wonders of fracking and give them monetary prizes?”

The award-winning videos from 2018 describe in glowing terms how much mining contributes to Nova Scotia’s economy, along with the importance of mining to Canada’s way of life and the high standards of environmental regulation in the province.

Last fall, MANS called on the province to relax those same environmental regulations and allow for mineral exploration in protected wilderness areas, which the lobbyist group says are “basically the same as unprotected lands.”

Kirby defends the association’s video contest, which he says has received positive feedback from students, parents and the communities involved. Without mining, he says, there wouldn’t be waste collection services, the internet or as many treatments for cancer, depression or malnutrition.

Zann, however, is standing firm on the fact that there is no place for a contest of this sort in Nova Scotia’s schools.

“I’m worried that they’re going to turn robots out of our schools, and that’s not the direction that I believe Nova Scotians would like to see it go.”

Kirby says MANS hopes to continue promoting the “Mining Rocks” video contest in schools across the province for many years to come.