A collaborative project makes use of a romantic old photo album as inspiration for new songs, new art and a new album 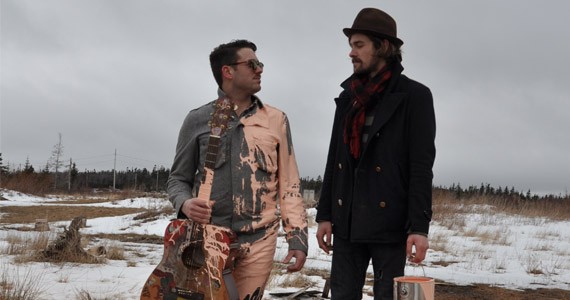 Trask and Allain find inspiration in the junk shop

Local bluesman Mike Trask and painter Benjamin Allain are fiercely analogue about their collaboration. Album: a Collage of Music & Art is their type-written, tape-recorded and live-painted love letter to a woman they haven't met.

Picking up an old family album to see relatives preserved in the flawed amber of film can turn loved ones into mysterious strangers. A similar alchemy took place when Trask and Allain happened upon a curious muse at a Halifax junk shop. "We bought the photo album without even looking inside of it," says Trask about photos which chronicle a woman's life "from her marriage in the 40s, till she was elderly in Florida wearing a one piece and short-shorts bathing suit. It just seemed to be so ripe with stories."

When Allain cut up the pictures and re-arranged them into a brief narrative, Trask wrote a song in response. "It was a heavy thing to stare at," Trask says. "There's so much emotion on the pages of a photo album."

The duo made the leap from one strangers life to historical gender dynamics. "The whole project revolves around the potential problems with domestic living, especially in the past and the general treatment of women," he says. Songs like "Hat and Coat" is a demented electric number about a woman who refuses married life or "Judy From the Moon"---about a mean husband who doesn't know how to tell his wife she's the best thing that ever happened to him---explore the theme.

"A lot of good comes from being limited," Trask says of his choice to record on tape. The method conceptualizes the collaboration around a tangible artifact. "For the last tune, which is a new tune Ben's never heard yet, he will get up and paint," says Trask.

This spontaneous creation can be bid upon at each of the duo's shows on its Maritime tour, and they'll be bringing along handcrafted albums for sale. It's "something like a film noir spaghetti-western set in the Maritimes," says Allain, "a poutine-eastern."