Memories that are hard to forget

One World War II veteran and the stories that aren't told. 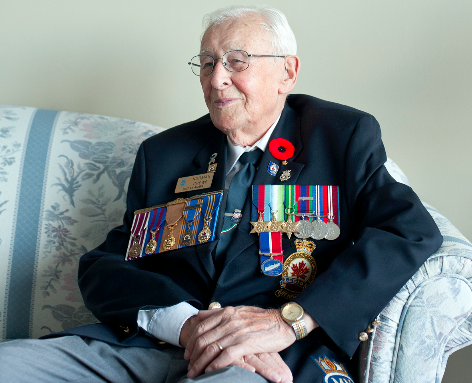 KRISTA COMEAU
It’s been 75 years since Norman Crewe signed up to fight.

Newfoundlander Norman Crewe was a member of Canada’s Merchant Navy during the Second World War. He served in operations on the Atlantic Ocean and the Pacific, but many comrades aboard these enemy-targeted vessels carrying crucial equipment and supplies never returned home. Chances of survival were slim because convoy ships weren’t allowed to stop to rescue merchant mariners after attacks. Crewe, a 94-year-old Halifax resident, was 19 when he signed up.

Why did you decide to join the Merchant Navy?
In the First World War, my dad was in the British Merchant Navy. That’s when Newfoundland was a British colony, you see. I always said, right up until the time that I left home, if the time ever came that war would ever happen again, I think I’d like to follow in his footsteps. Which I did.

Did you think about the danger, the possibility that you might not survive the voyage to your destination?
Yes. A lot of people said they didn’t, but I don’t believe that. You always had that fear—especially if you’re in convoy. One morning, at 5:30, it was between dark and daylight, and a [Merchant Navy] ship that was in the next column got [hit with] the torpedo. We’re not allowed to stop. And there you are, you’re standing by, and you know there’s guys in the water. You could hear them singing out: “Help—please don’t leave us.” That stays with you for a long time.

Which was more challenging and frightening, your time spent on the Atlantic or on the Pacific?
The Atlantic, much more. I didn’t spend too long in the Pacific. I had about nine months on the west coast. On the Atlantic, not only did we have the [German] submarines to worry about, we had the North Atlantic in the wintertime, with the storms. We would go single-file out of Halifax Harbour until [fanning out at] Chebucto Head. Fifty-two ships is the [largest convoy] I was ever in during World War II—and that takes up a lot of ocean.

For a long time the role and sacrifices of Merchant Seamen were overlooked, until Ottawa officially recognized them as veterans. How did you feel about that?
It still hurts. We tried. We tried with the [federal] government, time and time and time again. But in no way would the government recognize the Merchant Navy. But we take our hats off to [vocal supporters, such as] the honourable George Baker, the [former] MP from Newfoundland and [former New Brunswick MP] Elsie Wayne. And we had to turn around and send three [Merchant Navy vets] to Parliament Hill, and they go on a hunger strike, in this day and age, to prove that we were veterans.

World War II ended 70 years ago. How often do you think about your war experiences?
A lot. There were [convoy ships] that went down. On those ships, a lot of my buddies—and I mean close shipmates—went down on them. For years and years, I didn’t want to talk [about the war]. Our daughter and son would say: “Dad—tell us some of your war stories.” And I’d say: “Listen—let’s talk about the weather.”