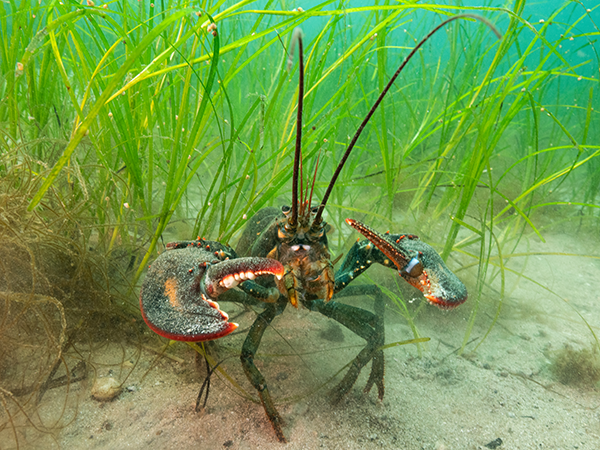 Nick Hawkins
Pinchy little crustaceans like lobster find protection in eelgrass, which coats Nova Scotia's coastline and is vital to our ocean's ecosystems.

Dive below the waves somewhere along Nova Scotia's coastline and you might encounter a thriving ecosystem that is vitally important to our fisheries, our ways of life and our climate: An underwater eelgrass meadow.

See the play of sunlight in the meadow's swaying underwater forest, fish darting between the blades of grass and discover other creatures feeding and clinging to the vegetation. Eelgrass may resemble a seaweed, but it's actually a plant, complete with flowers and roots, that spends its life under the waves.

Eelgrass may not look like much; it's long, stringy and green in the water, or lies crisp and blackened on our shorelines. But the services it provides are inextricably linked to local people's way of life and livelihoods, says Jordy Thomson, marine science and conservation coordinator at the Ecology Action Centre.

"People have valued eelgrass for a very long time," agrees Borris Worm, marine biologist and professor at Dalhousie University. He says Indigenous people and fishers "know this is an important habitat to keep part of the ecosystem, that we can't afford to lose."

Eelgrass protects shorelines against storms, cycles nutrients and provides juvenile fish and lobster with places to hide and grow. If that's not enough to convince people that eelgrass is a super plant, it is also many times more efficient at capturing and storing carbon than terrestrial forests.

This concept of blue carbon (carbon storage in marine or coastal ecosystems) is a relatively new area of research, says Thomson. "We haven't given it quite the attention it deserves, and we've probably lost a lot of our eelgrass meadows in Nova Scotia before we've known how important they are," he says. In context of a climate emergency, the protection of eelgrass is more important now than ever.

"If you lose eelgrass there's nothing to replace it," says Heike Lotze, a researcher and professor at Dalhousie University who studies human impacts on marine species. "It's the only marine plant we have that really roots in soft sediment."

Without eelgrass, not only do we lose its carbon capture and storage capacity, but it's also a blow to ocean ecosystems, akin to the removal of a forest on land. Except, forests can be replanted. Restoring eelgrass once it is lost often ends in failure, says Lotze. "My one-liner is 'don't lose it in the first place,'" she says.

While protections for eelgrass can be put in place, Lotze points to a lack of understanding and recognition that what happens on land directly affects the ocean. Eelgrass is extremely sensitive to runoff (water carrying sediments and or chemicals) from land due to human activities such as development and agriculture. However, policy and regulations often stop right at the tideline, creating an artificial disconnect between land and sea.

Eelgrass around Owls Head Provincial Park on the eastern shore was part of the reason the federal government proposed the area for a Marine Protected Area—land that was also supposed to become a provincial park but was de-listed by the province and put up for sale—for a golf course whose sale is now "pending" after opposition from the public.

And beyond Owls Head, we still know little about the extent of eelgrass beds in the province, says Thomson. With better data and mapping (in part through a new project by the Ecology Action Centre starting this Spring), he hopes better protection measures can be put in place, and, where applicable, restoration projects may help re-establish these key ecosystems.