Meet the birdman of Fall River

Carlyle Smith has an extra-aviary hobby—releasing white birds at funerals and weddings.

Almost every day, Carlyle Smith opens the doors to his aviary and watches as a cloud of birds rise into the air. A rare sight for some, but it’s a common sight for Smith. He’s been flying birds professionally for 12 years.

Smith operates a bird-release business. Since 2004, he’s been the man to call locally for any event that wants a flyover of white birds. Although that’s mainly weddings and funerals, Smith says he’s also released birds at birthdays, graduations and baptisms. “Anything where they want a little dramatic flair,” he says.

Smith traditionally releases two white birds at weddings to represent the bride and groom, and three birds at funerals (most commonly to represent either the Father, Son and Holy Spirit, or the deceased person and their parents).

It costs around $200 for a release, but that can change depending on how far away the event is and how many birds he’ll be using. Smith says he’s done releases all over the province—even outside the province—and the birds have always found their way back. 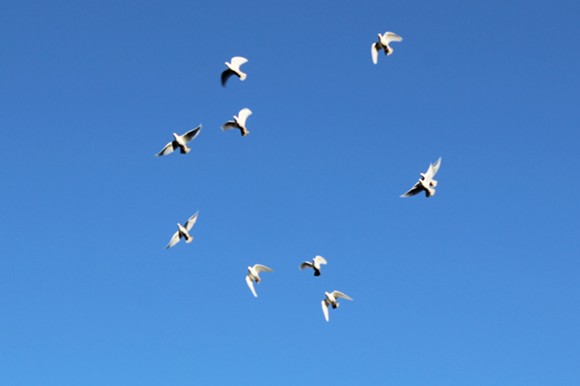 Smith’s started catching pigeons when he was 10. He’d find them in his family’s barn, and raise them in apple boxes.

“We were farm kids, that’s what farm kids do,” he says. “We didn’t have computers to play with, so we played with pigeons.”

These days Smith has a farm in Fall River with three livestock buildings and a total of 14 breeding and hatching pens for at least a hundred birds—although he says he has no idea how many he actually has on the property.

He doesn’t actually train the birds. He’ll usually just let them out flying for a few hours each day so they can get to know the territory to find their way back home. The flying times need to be shuffled around, though, so as not to draw the attention of hawks, otherwise known as the “menace of the pigeon business.”

“If I left the birds out all day, they’d figure out there was a food source.” Though they aren’t trained, Smith recalls a few times over the years where his birds seemed to have a sort of intuition. He says he did a release recently at a funeral service for a young man who died of cancer. The deceased used to be a ball player, and his cleats had been left on a mound. During the release, one of the birds broke away and circled the mound.

Another time, during a funeral, one of the birds circled around a boy in a wheelchair and sat on his shoulder.

“There’s no way you can even script that,” says Smith. “I don’t make any effort to explain it, or to predict it, or anything. It just happens. And so you just smile and say ‘That’s the magic of the white birds.’”

Adept Tattoos does tats for bats

Banned pit bulls up for adoption in Maritime shelters