Mayor on Cornwallis panel: “I don't really think it's useful to point fingers”

Mike Savage offers no direct comment, but alludes to Chief Wilbert Marshall's nomination for historical panel as one of the "issues” for why it imploded. 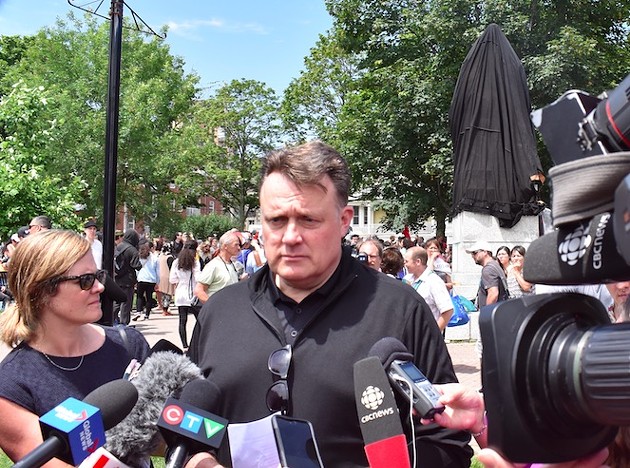 THE COAST
Mayor Mike Savage addresses media back in July during protests about the statue of Edward Cornwallis (draped behind him).
The Assembly of Nova Scotia Mi'kmaq Chiefs wants immediate action. Halifax mayor Mike Savage, however, is looking forward to more conversation.

On Friday afternoon the Assembly officially walked away from participating in HRM's historical panel on the legacy of Edward Cornwallis. The Chiefs cited ongoing delays in dealing with city hall and called for the statue of Halifax's controversial founder to be immediately taken down. A rally towards that idea is already scheduled for next weekend. On Saturday the mayor's office released a response, stating HRM “remains committed to continued dialogue on our journey of reconciliation.” But how things move forward from here and what caused the breakdown between HRM and the Assembly of Chiefs is still unknown.

Earlier today mayor Mike Savage spoke over the phone with The Coast about the Assembly's decision and what comes next. His answers have been lightly edited for style and clarity.

What's your response to the release that went out yesterday?
We were a bit surprised, but we recognize the decision that they made. We acknowledge it, and we obviously now have to look at how we respond—not just me personally, but council as well, and that's what we're going to do.

What sort of response do you mean?
Well, we have to figure out what this means. Obviously, we're going to have to adjust—and I don't want to get into arguments about whether this was the right thing or the wrong thing, or whose fault it is. All the way through this I've indicated that reconciliation has to be at the heart of how we deal with that, and I'm going to keep that in my mind and we're going to move forward.

Will the panel still go forward?
Well, it's not going to go forward in the way we constituted it, as the Assembly indicated they don't want to be a part of it. I can't make that decision on my own. I have a few thoughts on it, as to what we might do, and I'll share those with some council colleagues. But I think, I believe, the work of reconciliation has to go forward and I think this has to—in some way the conversation has to be had, and certainly this is not the way we expected it to be. But I'm not going to react until a lot of serious thought has gone into it from me and others.

Why was it taking so long to bring the panel together?
We had identified this process and, you know, there were issues that came up. I don't really think it's useful to point fingers because we are here. It's January the 27, and I honestly believe that what matters the most is what happens from here forward, not from here back. So, we're going to continue the work.

With the public now thinking of this process as overly long and full of delays, without any clear indication of when anything's going to happen, can you offer any more clarity on what some of those issues were, or what particularly caused the Assembly to back out?
No, no, although I suspect you might. But no, I'm not going to comment on any of the reasons. Frankly, it's not helpful, and if we're going to move forward and we're going to try to make a difference in the way that we have a relationship with First Nations—particularly the Mi'kmaq, but First Nations overall—then we have to continue to look forward positively and not look back negatively.

You said I might. Is that in reference to Wilbert Marshall's presence on the panel?
No comment.

The Chiefs have called for the statue to be taken down immediately. Will it be?
Well, we have to give it thought. We had a process in place to deal with that. The process is changing, and we'll adjust to it. I just can't give you definitive answers. That's what you want, but I don't have definitive answers. I'm one person in the discussion. My heart, I can tell you, is open to finding a way to make a good decision on this and I'm going to do everything I possibly can to get there.

Yourself and other councillors have said Truth and Reconciliation take time, and also that the panel was a step towards progress. Do you still feel that way?
Of course. We lost by a vote two years ago and won by every vote except one last year. I think that was the right decision, and whatever happens with the panel, I think we can continue to move forward. I don't think that you let setbacks stop you on the road to progress. I wish I had a simple answer to this. It's a complex issue, and I'm doing the best I can, and I think is as well.

Do you think should make a definitive call on this, one way or another, or is more study, more conversation still needed?
At the end of the day, is always going to have to make a decision on this. I still think it would be helpful to have advice from people who've given it and useful thought. I hope that may still be the case, but if it's not we'll have to deal with it in a different way. But at the end of the day, this is going to be a decision of .

Why would that advice be useful? It feels like council has already had a lot of time to think about and discuss these issues.
Well, because it's not just a vote at council. It's not just whether the vote is 9-8 or 15-2 or 12-5 or anything else that adds up to 17. The TRC had 94 recommendations, but it also had principles, and among the principles was that there had to be education and there has to be understanding. I think this process had the opportunity to add that, which I think will be very helpful. I still believe that. But if that's not going to be the case we'll have to go a different route. But I look forward to having conversations. I do want to have conversations with the Chiefs on this and I'm open to discussing it at any time.