We can theoretically afford it, but Halifax's history with stadium proposals doesn't bode well. 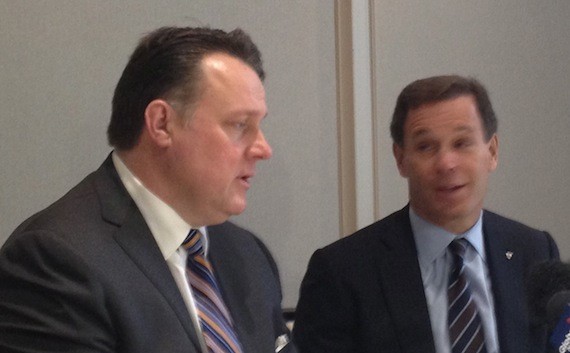 Mayor Mike Savage and CFL commissioner Mark Cohon have been discussing the possibility of a CFL franchise coming to Halifax, and today the pair took questions from reporters concerning the effort. There are two intertwining issues involved: the building of a stadium and starting and operating a Halifax team.

Neither idea is entirely crazy. And if done right, they could even be done responsibly. But given our history, that's a mighty big IF. Let's look at them separately.

There are lots of arguments against a stadium, but the best is probably this: Shouldn't Halifax's severe shortage of ball fields and under-capitalized recreation centres be addressed first? Ball fields, recreation centres and active transportation infrastructure have direct immediate positive effects on the health of the citizenry, while the broad health benefits of a stadium are at best remote.

Understand that we've already spent millions of completely wasted dollars chasing the stadium dream. This money was spent stupidly, because rational analysis was not allowed to enter the discussion until it was too late.

The quest for a stadium started with the Commonwealth Games bid fiasco, which unfolded in 2006 and 2007. One of the selling points of the bid gambit was that we'd end up with a stadium as a "legacy project," but like everything else involved in chasing the Commonwealth Games, the stadium was delusional thinking. The bid committee hired WHW Architects to produce a report detailing a 50,000-seat stadium to be built at Shannon Park. Half the seats would be temporary, and so after the Games we'd have a 25,000-seat stadium.

We've seem to have learned from that mistake—Savage is talking about the team and the stadium as a package deal—but that doesn't recover the money spent. The entire Commonwealth Games bid cost taxpayers $8.5 million. Of that, $2,370,566.17 went to WHW, most of which was specifically for designing the stadium.

And indeed, the consultant's skepticism of the proposed Commonwealth Games stadium was borne out in 2011, when Halifax council considered building a stadium in order to host the 2015 FIFA’s women’s world cup of soccer. Council found that the two million and change we had spent just four years before for the design of a stadium was completely useless. Design for a new stadium would have to start at square one.

Second, what rational government wants to deal with FIFA, arguably the most corrupt sports organization on the planet, and whose president tells gays to "refrain from sexual activity"? FIFA is an odious, repugnant organization, and Halifax's political leadership was willing to jump into bed with it. This should give us pause.

As the FIFA stadium idea collapsed, the party line was that the stadium studies could at some future date be brushed off and used for another stadium. At the time, then-councillor Jackie Barkhouse called bullshit: “That’s just a fig leaf used to justify the expense of the studies,” she said. Sure enough, today Savage mouthed platitudes about "some" of the information from the 2011 reports would be "useful," but acknowledged that we'll have to go through another round of consultant studies for a new CFL team-oriented stadium. Back to square one.

Still, if we can somehow ignore past mistakes, and if we insist on an honest accounting, a stadium isn't a completely ridiculous notion. The number being bandied about is $60 million for a new stadium. That figure comes from the 2011 FIFA stadium idea, which itself was never really scrutinized.

But there will be lots of other costs. Biggest will be the new roads needed to get to a new stadium. Assuming the thing is built in Shannon Park, that probably means rebuilding the 118/Victoria road interchange, and building a new access road into Shannon Park, along with a signalized intersection. Let's peg the full cost of a new stadium and its related infrastructure at, say, $100 million.

Cohon, the CFL commissioner, today held up the Lansdowne stadium in Ottawa, which is part of a much larger, half-billion dollar, mostly private development project, as a possible model for a Halifax. Savage seconded that opinion. "Our new convention centre is in a half-billion dollar development, which has a $150 million publicly funded convention centre in it," he noted. Savage envisions some corporate involvement, along with a provincial contribution, to fund the thing.

Well, maybe. But it's already problematic that Savage is low-balling the cost of the convention centre. The capital costs of the convention centre are $159 million, not $150 million. The federal government put up $46.7 million up front, but the remaining capital costs are to be amortized over 25 years, for a total expenditure of $260 million. Then there's operational costs of $2.9 million a year, or $72.5 million in total. And the city will be required to buy the existing World Trade and Convention Centre building, for something like $11 million, and then renovate it for several million more dollars. And then there's the operating losses….

The point is that the accounting for a stadium can't be half-assed, like the accounting for the convention centre has been. Savage and council need to be honest and upfront about the true and full costs of a stadium, and not use smoke and mirrors to low-ball the figures.

Savage insists he can get private buy-in for a stadium. We note, however, that while Savage is excitingly announcing meetings with allegedly interested "private partners," he won't say who they are. The CFL team will merely be one tenant of the stadium, presumably with a zero-dollar lease for a dozen games a year.

Again, we shouldn't ignore our recent history. When the city spent $50 million for the four-pad arena in Bedford, it sold naming rights to BMO for just $100,000—that's a return of 0.2 percent from the private sector. And when council was chasing the FIFA stadium, staff spent considerable time and money recruiting private investors, only to find that (page 6), "Although there is anecdotal interest from the private sector, there has been no evidence of financial support."

Still, $100 million for a stadium, with an annual operating deficit of, say, $2 million is affordable, especially if Savage can somehow wrangle a provincial buy-in. As this chart shows, council has done a remarkable job in reducing the city's debt over the years:

Adding $50 or $60 million to the debt is manageable, and even $100 million is doable. But is it smart? After all, there's that severe shortage of ballfields, the under-capitalized rec centres, those unbuilt active transportation trails. And the looming costs of the convention centre.

But we afford what we want to afford. Just as the police department gets whatever it wants because that's the way the politics roll, we'll probably get a stadium because that's what people are demanding. Such is life. But we can still hope for some honesty through the process, no?

This part is easy: Cohon says he's looking to line up investors for a team, and is very excited about the possibility of a community ownership model like the Saskatoon and Winnipeg teams, where shares are sold to fans. Well, we wish him luck.