He's not a fan 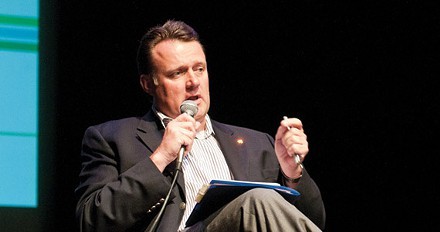 In a blog post published today on mayormikesavage.blogspot.com, the mayor spoke in a diplomatic way about the Liberal budget. In the nicest way possible, he said that the plan to cut to the film industry tax credit in particular need adjustment. Read the post below.

The provincial budget of 2015 was projected to be tough, and it was. People lost jobs, departmental spending is set to be well below inflation, and an entire department was eliminated. These are tough measures, and I think it is a time for tough measures. The government did, however, also make some important new investments that show they are sensitive to the needs of people who are facing significant challenges. All governments at all levels are facing financial and productivity challenges, and failing to respond to those realities – as painful as they might be - can hurt more people in the long term.

And then there is the restructuring of the Film Tax Credit (FTC). The changes that have been made are quite dramatic and will have a disproportionate impact on film production in the Halifax region. Since the introduction of the FTC in the 1990's the industry has grown significantly, and benefits our Province in a number of ways. It leads to jobs in the industry, and has deeper impacts in supporting other industries and entrepreneurs across the community. I have been on sets locally and seen how many local companies benefit from the film and animation projects.

The financial impact of restructuring the FTC depends on who you ask, but people in the industry and other observers are more than worried about the net result. So am I.

I am reticent to challenge the decisions of other governments as they grapple with tough action. I know from my own political experience, and particularly that of my father who governed in challenging times, that there isn't an easy route out of deficit and debt. And I know that most people are inclined to urge restraint and serious action to reduce government spending, until it has an impact on them or their projects. I also know that Premier McNeil and Minister Whalen are good people who are focussed on doing the right things, even when they are not popular, and they are on the right track. But I think this plan needs to be adjusted.

I am pleased that Minister Whalen is meeting with representatives of the film industry, and I urge reconsideration of the dramatic changes to the film tax credit.