Mauno brings it all home

The Halifax quirk-pop quartet caps off an autumn of transatlantic touring with a hometown release of Tuning. 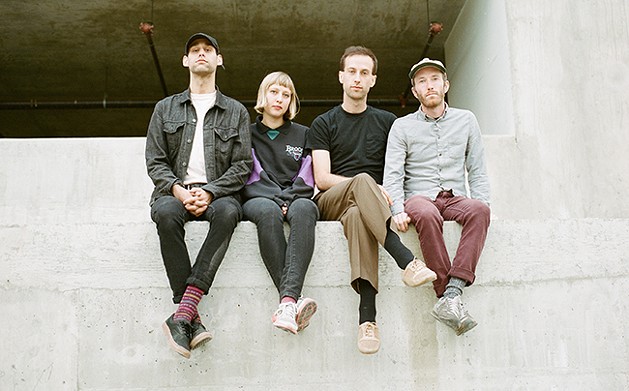 Nick Everett doesn't beat around the bush. The music he makes as a part of the band Mauno—with guitarist Scott Boudreau, bassist/vocalist Eliza Niemi and drummer Adam White—carries this same affects as his conversational style: Spry, thoughtful, quietly intellectual. Their songs are studies in tension and release, pulling from decades of Halifax jangle-pop, math-rock and folk music to make something that feels decidedly of the moment.

The band released its second album, Tuning, in October, and has been on the road for the better part of the fall playing its songs at shows across Europe and North America. Tuning was made with engineer and mixer Alex Sheppard in a house on Chebucto Road, a collection of songs built while touring behind the debut Rough Master. Months on the road have refined the band's playing and tightened the members' connection—and they're bringing that energy home for a record release show at the Seahorse with Jon McKiel and Juice Girls on Thursday.

"We're getting to know our voice a lot better—we're learning how we sound together and how we work together," says Everett. "I think that over the course of making the record we found a sort of cohesion...The songs sound maybe sometimes all over the place or back and forth, but I think that it's a definite step in the direction of finding who we are and learning to grow together."

Everett's right: A Mauno record can feel all over the place, like something between a tightrope act and a game of table tennis. The band toys with tempo and meter; Everett and Niemi's voices stretch vowels taut; the rhythm section snaps between building shuffling foundations and a more frantic energy. Two albums in, that stop-and-start character feels quintessentially Mauno—something Everett says arises from a want to serve the songs and challenge their listeners.

"Now we can cut out a minute of a song, and instead of leading a listener we can just jump to a new idea without insulting anyone's intelligence," he says. "We're trusting the ear to make those leaps...It's like what's funny about a joke [or] what's great about good writing—there's a bunch left out and you have to use your imagination to get from one thing to another."

Everett's excitement for their hometown album release show is palpable—despite a relentless touring schedule, he says the band has been "waiting for this show for the whole tour" and shows no signs of slowing down. "We've moved past the point of the songs even needing to feel rehearsed—we could play these things in our sleep," he says. "To do a song justice you need to invest yourself emotionally in it, and you can't do that when you're barred from it because of technicality. It needs to feel effortless in order for you to actually access that part of yourself.

"It feels like we've gone out and accomplished great things, and now we get to bring it all home."