The Dalhousie University student and outspoken political activist wants to better her hometown of Halifax. Just try and stop her.

MEGHAN TANSEY WHITTON
“A lot of people come up to me and say, ‘You should be more like Martin Luther King.’ I'm more of a Malcolm X type of gal.”

Over the last year, Masuma Khan has led thousands of students into the streets to protest high tuition fees, spoke at the local Women’s March on Washington and organized a public vigil after the deadly Quebec City mosque shooting. The 22-year-old is also vice-president academic and external for the Dalhousie Student Union, works with the school’s Sexual Harassment and Assault Resource Group, organizes public lectures to combat Islamophobia and is the outgoing-president of Dal’s Muslim Student Association. In between all those roles, she’s also an international development studies student entering her fourth year of study.

So understandably, she’s tired. But Khan’s fatigue isn’t from her schedule. She’s tired of dealing with “all the BS” in the world—the bullshit that comes with being an Afghan woman, a Muslim woman, a disabled woman (two spinal surgeries over her university career). It’s what drives her fight for progress, Khan says. She couldn’t live with herself if she didn’t.

Here the student leader talks about her heritage, racism in Halifax and the DSU’s controversial year. She had a lot to say.

How did you get involved in activism?
My mom was a bit of a feminist activist as well. Growing up, seeing a Muslim woman giving speeches in Victoria Park, my mom really instilled that kind of activism in me. Hers was more about women’s rights and anti-war activism, and mine is just kind of everywhere. I don’t think we can affect change by just helping Indigenous groups; just helping Black folks; just helping queer folks. We need to have a multi-tier effect. When you see how white supremacy is tied to anti-Blackness, Islamophobia—it’s a BOGO. You buy one, you get the other for free.

A lot of people, either out of laziness or cynicism, tolerate intolerance. What makes you take action?
I’m not trying to knock the hustle of people who have to take that moment of self-care. You can’t pour from an empty cup. But you’re right. There are a lot of people who feel that change won’t happen; freedom isn’t achievable. People are not realizing the potential that human beings actually have in organizing. Once you meet, at a rally or whatever, there’s an exchange of ideas and we grow as a community. I know some people don’t think that’s life-changing, but for me that is. When I hear what a queer person goes through, for me that’s life-changing. Now I have a better understanding. If I’m misgendering someone, knowing that I can be a less oppressive person—even though the system won’t change, even if nothing changes, we will change. We will better ourselves and eventually it will become better.

Are students more politically organized these days?
I feel activists are kind of born out of university and the oppressive practices that different universities have. But I do feel there is an uproar because of what’s happening in places like Charlottesville. The thing that’s scary is there are two sides. I guess that’s why I do a lot of education stuff in the Dalhousie community. A lot of people don’t realize that racism happens on our campus.

Have you seen more of an organized alt-right presence on the Dal campus?
Not yet. The reality is students who are part of the alt-right are organizing all across Canada. I’m kind of waiting because I think it’s going to be a matter of time before it happens here. The thought’s there. Some students are very anti-Indigenous, anti-Black, anti-Muslim, anti-everything.

The DSU faced criticism last year as a result of motions to boycott Pride and not participate in Canada 150. Why were those decisions made?
I was at the Pride [Annual General Meeting]. Even myself as a non-queer or trans person, being in that space just as a minority was so oppressive—the looks, the stares. People always have a hard time describing what racism is, and in that room, it was like the air was racist. The decision was made after that [by the previous DSU council], and we’re going to revisit the boycott. It’s going to come back up again this year. If [Halifax Pride] does better, if they actually do some community consultation, it’ll come back. It wasn’t a forever thing, it was just an act of solidarity.

It was the same thing with not participating in Canada Day, which we never have, mind because students aren’t on campus. The SUB is closed. We’ve never participated in Canada Day, so it was really more of an  of solidarity. You know, it got some backlash.

Were you surprised by the response?
Yes and no. I expected there to be different opinions, but I didn’t expect it to be so targeted.

Targeted at you?
Yes, because I’m not the issue. If you’re going to target it at the issue, let’s talk about Indigenous issues. I don’t want to be the focus of that.

People feel really strongly about Canada, especially with folks who are immigrants. They feel a responsibility to this country to show love and respect because it’s given them a safe home. I understand that. My parents are immigrants too. But I don’t believe that because of my parents’ displacement I need to abide by the oppressive rules of this land in displacing Indigenous folks. 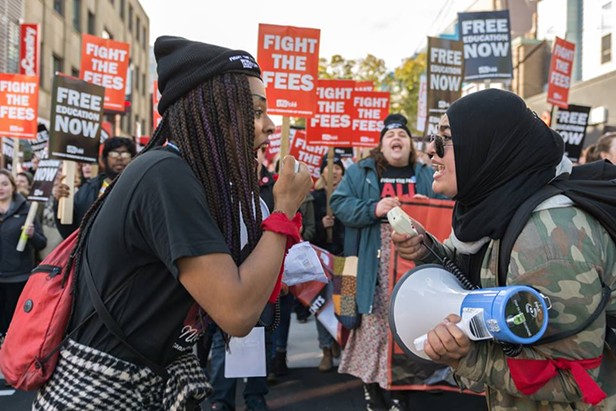 PATRICK FULGENCIO
Jade Byard Peek (left) and Khan hype up their fellow students during last fall’s march against tuition fees.
In response to comments from the Young Progressive Conservatives, you published a Facebook post saying you wouldn’t stand “privileged white people” celebrating “over 400 years of genocide,” along with a few hashtags, like “white fragility can kiss my ass.” Why’d you  that?
At the council meeting where I brought up the motion, a council member basically told me if I don’t like Canada, I can get out. I think Canada, this land, needs more people like me that will stand in solidarity. I was upset, and to see a post criticizing the DSU for taking a solid stance and action in solidarity was really hard for me. Especially someone who comes from a long line of resistance. My family, on my mom’s side, is part of the last royal family of Afghanistan. My great-great-grandfather was actually the king. He fought the second Anglo-Afghan war and helped kick out the British. My family has this long history of decolonizing the land.

I was angry, and anger’s valid. That was my way of reaching out to my support groups. Somebody asked me to make it public because they thought it was an amazing post. So I  and got more backlash, which is fair. People are allowed to have their opinions.

Why’d you it?
The decision was not entirely my own. I think it’s fair to say a lot of people have been disappointed in my post or angered by or felt like they dealt with some kind of racism from me pointing out white privilege. I was being pressured by some group—I can’t say who, definitely not the DSU—but I was being pressured over my actions and my words. They felt I was being discriminatory to those who identify as white. So the post was deleted because of that.

How much pressure is there to be a “good” activist, who’s respectful and doesn’t show that frustration or anger?
A lot of people come up to me and say, “You should be more like Martin Luther King.” I’m more of a Malcolm X type of gal. He was my role model—an activist who was Muslim, finding his way through the civil rights movement, who had no tolerance for any kind of injustice and really ridiculed the system. This is the kind of person I want to be.

People are “You need to speak more eloquently.” Why is it I need to use this language in the way you want me to portray my own  when I can use this language in a way I want to convey my feelings? Nova Scotia here, we use the f-word like it’s the second word after  you. That’s just how we are. We’re Scotian, that’s how we speak. But people had a problem when I said it. To them, my anger is not valid and they don’t want to give me space to validate myself in the world. For them, my anger doesn’t exist; my injustice doesn’t exist; my identity doesn’t exist.

How do you avoid getting burnt-out?
Go cuddle my cat. I surround myself with supportive people. I’m very close to my sister, so I hang out with my sister a lot. My mother is an amazing woman, and my father is an amazing man as well. Sometimes you just need to go home and eat a good meal, eat some Mama’s cooking and get full in that way.

Halifax, wake up, have your cup of coffee in the morning, breathe in this fresh east-coast air and realize there’s a lot we need to change in our city. It’s time we get to it.

This interview has been edited for style, clarity and length.