What started in 2012 as a sketch show in the sweltering Khyber attic — with Andy Bush, Cheryl Hann, Brian MacQuarrie and more — Good Morning Tonight became such an annual hit that the ensemble cast staged a sold-out special for the Halifax Pop Explosion last fall.

The show usually centres around Andy Bush, now a hot-shot L.A. director who comes home for summer vacation. Little soon appears as Bush’s father, “Rollie,” who routinely interrupts and humiliates Bush's attempts to host his own talk show. This year, with Bush still in L.A., Rollie is left to his own devices as the host of Good Dad Tonight. Rollie never holds back. That’s his thing.

“My son Andy isn't here yet so there’s more time for me, Dad, to bring you the freshest takes on the latest political snafus and some classic bits,” says Rollie, “When it comes to good old-fashioned fun, Good Dad Tonight is like a comedy version of Kelsey’s: family-friendly and full of love."

"We’ve switched things up to bring you more music and even more laughter. Rich Aucoin will be on hand to perform one of his ‘youth anthems’ or whatever he calls them. I told him no parachutes and he threw a fit so we’ll see what happens. Windom Earle will also play some songs. This might be their last show so it could be an emotional night for their many fan. That’s not a typo.” 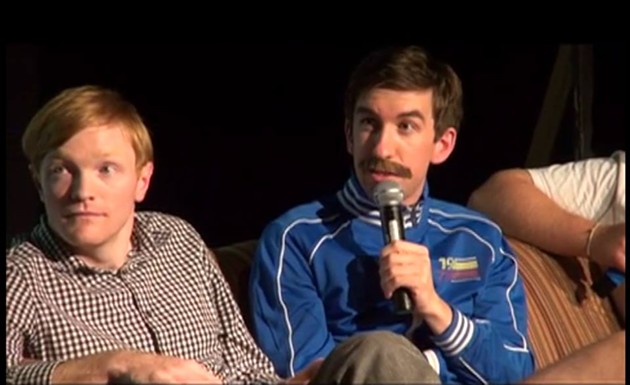 Miller and Rollie on the Comedy Couch
Rollie says he’ll perform some skits with “skit vets from the horribly named Picnicface” as Miller and Doucette “reprise their roles as non-contributors.” Along with Good Dad Tonight, Rollie reveals his other highlight of the summer: “Two words: Jazz. Fest.” He says it'll be fun, as always.