Faculty say the BOG has been biased, threatening and non-transparent under the lead of its current director. 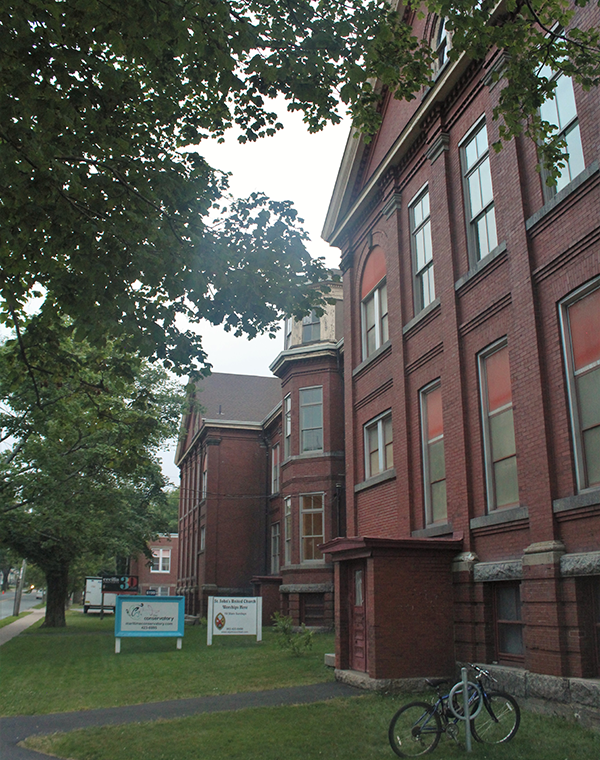 About 200 people attended a town hall meeting on Tuesday night to discuss the future of the Maritime Conservatory of Performing Arts, a performing-arts school and performance venue in the historic building at 6199 Chebucto Road in Halifax.

"Anybody in this room tonight is a stakeholder," said Jason Davies, the MCPA faculty association's dean of music.

Olga Milosevich was the only MCPA board of governors member at the town hall, and she explained to the crowd that she's lost faith in her colleagues. "The board is a very non-transparent board. Everything is done in secrecy," said Milosevich, the board's vice-chair.

This hush-hush goes back to the state of the conservatory itself—a 1910 brick building that once served as a morgue after the Halifax Explosion.

Last year, faculty got word that the board was in talks to sell the building, which is becoming increasingly expensive to maintain. The estimated cost of needed repairs is around $6.5 million.

There were whispers about finding a new location, (the proposed Westwood Development on Almon Street was a top contender), but there is already an online petition with over 7,000 signatures calling for it to stay where it is.

Now, though, the issue has become less about the building and more about the management of the organization.

"For many members of the faculty, the heart and soul of the institution are feeling threatened and discouraged," said Angus Campbell, faculty association treasurer.

At the centre of this conflict is the chair of the board, William Webster.

Webster has been chair for seven years and faculty say the position has no end date, as board members often simply re-elect themselves when their term is up. "It is time for Dr Webster to retire as chair of the board of governors," Campbell said at the town hall Tuesday—a statement that was followed by cheers from the audience.


The faculty are also calling for the removal of the Conservatory’s Dean of Music, new this past February, who has had multiple disagreements with conservatory staff.

“He’s been quite unpopular with most of our present faculty,” says BOG vice-chair Milosevich, “I think it’s indicative that this young gentleman is just not the right person.”

Those leading the meeting took questions from the audience, from "Who owns the conservatory?" to "What is Webster's job description?" and "When can we start working to save the building?"

"We very much want to have a conversation," said Davies. "Regardless of how you feel about this, what's been missing from this entire process has been open, transparent conversation."

One point of agreement is the conservatory needs serious renovations if it's going to be used as a concert venue in the coming years.

"We need to preserve the conservatory," said Milosevich. "It's a wonderful, historic building which has a lot of memories for many of us."