These two Silver strains are both great weed, but one is really super. 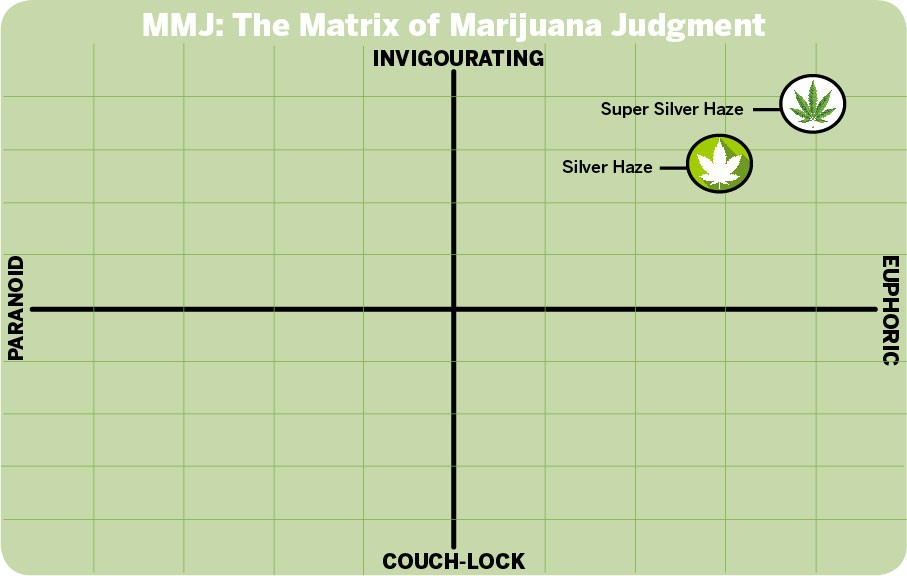 According to MMJ—the Matrix of Marijuana Judgment—Silver Haze hits the sweet spot.

Since my early teens, I've been combatting early onset osteoporosis while living with chronically inflamed tissue, anxiety, depression and attention-deficit difficulties. Over the last decade I have opened my cannabis consumption up to its medicinal uses, including microdosing in my one-hit pipe, using THC-infused topical arthritis balm on my joints and smoking decent hauls of hash every three weeks to deal with dysmenorrhea. In the last year I've become a member of two medical dispensaries, Coastal Cannapy and Canna Clinic.

This spring and summer, both shops stocked Super Silver Haze, a Sativa hybrid with a high THC percentage. I soon started referring to it as "marijuana Cipralex" (the little white pill I take for my daily boost of serotonin). Super has a frosty indigo glean, deep woodsy smell and smokes clean despite how crumbly even its fresh buds can be. It packs a real uppercut—I'm catapulted to peak stoned before even reaching roach territory. I cheerfully tornado through an entire kitchen and bathroom deep clean (though I jump between chores with a racing mind before completing them) and tumble slowly back down to earth as the high goes on. Alone time is extremely rare and precious to me, and Super is a choice solo strain for making to-do lists less annoying.

When I get recreational and share a bowl with my neighbour we flood my kitchen with motormouth punchlines. They tell me they definitely would not want to be in public after smoking Silver: "Pot either amplifies my ability to participate in the world or makes the participating very stressful." We agree Super Silver seems to be best suited for private smoking, or with your go-to buddies.

Strains tend to come and go and in Super Silver's absence I've had similar highs from Moby Dick (if you're training for the multitasking Olympics) and Eagle Scout (earn a badge for being life of the party). I was curious when two familiar words popped up on Coastal's WeedMaps menu: Silver Haze, hold the Super. I blasted down to inspect the bright tangerine-speckled buds, whose painfully juicy aroma made my mouth water and gums hurt like I ate too many sour ropes. I grabbed three grams and went home to sesh and nerd out about the two strains' genetic lineage.

Both are hybrid plants parented by their namesake Haze, a stimulating Sativa popularized in 1960s California that sparks creativity, and indica-dominant Northern Lights, a dreamboat of a mind/muscle relaxant with a legacy of beloved strain babies. Crossbred, Haze and Northern Lights become Silver Haze, which can then crossbreed with electrifying sativa Skunk No. 1, generating Super Silver Haze and one intense brain-buzz.

Smoking plain Silver was one of the purest feelings of relief I have experienced. After my first dose, I wanted to text everyone who heard me gush about its Super sibling and retract my Cipralex statement: I have found my new top tier strain. Silver is exponentially more grounding, social and far less "psychoactive" than Super, and the mental high does not conflict with my surroundings or my mood, but instills a feeling of assurance.

Where Super had me bouncing off the walls, plain Silver soothes a spinning psyche, slowing time down enough to let me catch my breath without compromising my ability to participate in professional or social settings. It's easier to hold eye contact (which social anxiety makes difficult) and to retain directions (which I'm terrible at). You could bust out a blunt of Silver Haze at a party and feel confident no one is going to trip—even your lightweight buddy who hasn't smoked since high school.

Most vital of all, Silver Haze offers a refreshing mindset altercation where I can be comfortable in my own presence. What a treat to just let my inner monologue flow without blocking it with hyper-judgemental self-awareness. For a high-functioning strain to relax your mind but keep you accountable, keep your eyes peeled for Silver Haze. I'm on my way to bag a quarter up from Coastal Cannapy now.

This is Lucy LaPlante's first weed review for The Coast but, with legalization coming by July 2018, not the last. You can email her at halijuana@thecoast.ca.