The One Who Keeps on Giving is a riveting collaboration between artist, gesture and object. 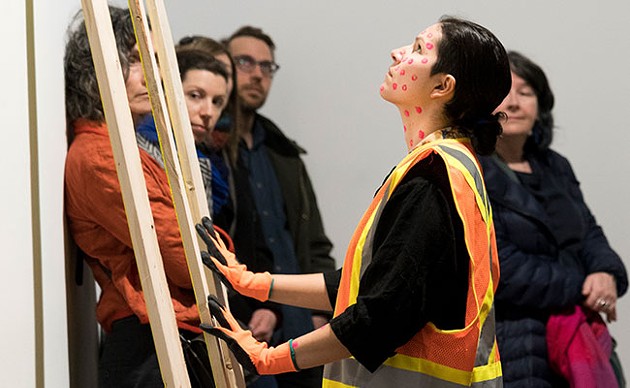 Ian Selig
Hupfield performs at the MSVU Gallery.
Maria Hupfield: The One Who Keeps on Giving
Mount Saint Vincent University Art Gallery 166 Bedford Highway
To May 13

Dressed all in black, four artists slip into orange work vests in headlamps before their faces are painted with neon makeup: Lines of hot pink across foreheads, small purple triangles on cheeks and electric yellow painted on eyelashes. Nodding in soft agreement as each pigment is applied, the artists' faces and reflective vests lit up by the small bulb of their headlamps.

So began a March 17 performance by New York-based Anishinaabe artist Maria Hupfield with local artists Raven Davis, Ursula Johnson and Amy Malbeuf at Mount Saint Vincent University's gallery. Travelling to five cities in two years, Hupfield's exhibition The One Who Keeps on Giving, on at MSVU until May 13, features a performance in each host city. "Working with a local artist is a way for me to connect with the place," says Hupfield. "With Halifax it was especially unique because this was the first time [during this tour] I worked with all Indigenous artists."

She notes that the number of performers nicely mirror the four performers in The One Who Keeps on Giving 2017, the video piece from which the exhibition shares its title. Collaborating with three of her siblings, Hupfield holds a painting of Georgian Bay made by her mother in the 1970s, which hangs nearby, as her siblings dance and sing around her, one wearing a felt jingle spiral made by Hupfield.

Alongside the jingle spiral (a kind of shawl with tin elements sewn in), a canoe, a cassette player, Ski-Doo mitts and a lightbulb hanging from a string—all made from a neutralizing grey felt, like one might find lining a pair of winter boots—are also on display, the smaller objects sitting on plinths painted the same electric yellow as the Halifax performers' eyelashes.

Like her mother's painting, these objects hold their own artistic merit as beautifully crafted objects while also serving an important role in Hupfield's performances. Whether it's portaging a heavy felt canoe through the streets of Venice or caressing the long grasses growing in Santa Fe while wearing heavy Ski-Doo mitts, the material neutrality of Hupfield's objects are charged when they enter her performances.

"I think of everything as having the potential to be animated or to acquire consciousness," says Hupfield in a 2017 interview with curator Andrea Geyer. "It is only during a live performance that we get to see the relationship...play out."

During the nearly two hours they perform in front of a Halifax audience, Hupfield and her three collaborators activate various objects in the gallery. Clothing is worn and danced in, wooden planks are held in mouths, aimed like rifles, sawed in half and taped back together again. At one point the performance becomes percussive—the artists singing and laughing as a rope is wound around them (laughing even harder when the rope breaks), drumming on hollow benches and gently flogging them with a leather whip.

"The performance is a chance where the gallery becomes a stage," says Hupfield—a balancing act between artist, gesture and object, where all elements act collaboratively and symbiotically. At the end of the performance the artworks are returned to their plinths, the vests and makeup removed. The four artists clasp hands before taking a final bow, the neon yellow cemented stubbornly to their lashes.