Many hands make light work at the Mobile Food Market

Thanks to great volunteers, The Mobile Food Market continues to work around barriers to bring fresh food to far flung neighbourhoods. 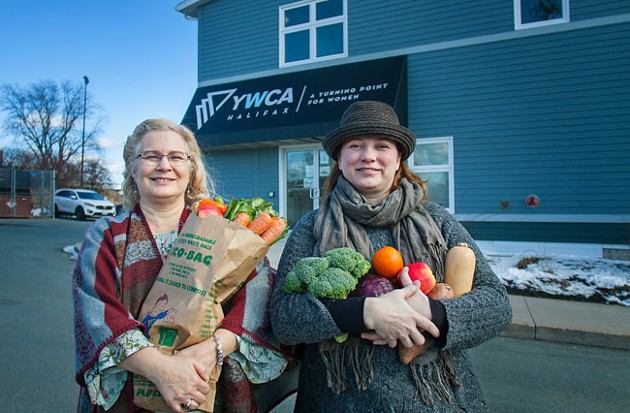 “I found I was getting sick quite often, and I just wasn’t eating any fruits or vegetables. It was just rice and protein, that’s really all I was eating.”

That’s how Adam Savory was eating before Halifax’s Mobile Food Market came to Spryfield. These days, he gets his veggies in by ordering one of the market’s bi-weekly “produce packs.”
“For 10 bucks, you get a huge ” says Savory, gesturing with his hands about the size of a microwave. “Every time I get it, I go and buy a pack of stew beef. Then everything I got vegetable wise goes in the crockpot.”

The produce pack is one of two market options in the winter months. Customers order in advance and pick up on Wednesday evenings. The 10-dollar paper bag comes filled with everything from spinach to potatoes to bananas.

“It caters to a different person,” says market manager Julia Kemp. “Maybe parents, or a single mom with kids who’s really busy, doesn’t have time to come to a market on a Saturday to shop.”

Other communities run traditional markets on Saturday mornings, where people come to pick out their own produce at a church hall or community centre. In the summer, the market fills a repurposed city bus with local produce and travels to each community for customers to shop at.

Although an advisory board overlooks the project, each community takes its own unique approach. The Fairview market provides a pop-up library, free wifi and live music. In East Preston, market coordinator Melinda Diggs creates weekly recipes to share and in North Preston, the Baptist Youth Fellowship provides youth with their first job opportunity helping run the market.

“It’s the residents and the volunteers and the folks that work in those communities that are really running and shaping the market,” says Kemp.

In , market coordinator Twyla Nichols runs the produce pick-up out of the YWCA, which has become a community hub.
“We’re really supportive of each other,” says Nichols, noting that local MLA Brendan McGuire has donated money to subsidize a number of produce packs each week. “If mobility issues, we deliver. A woman has trouble getting up and going to the grocery store, so we take it right to her home.”

Because the city no longer provides bus service on the Spryfield-Sambro loop, the Mobile Food Market has branched out to launch a produce pack pickup at the Williamswood-Harrietsfield community centre. “If you don’t have a car, how do you get groceries? There’s an Irving, but no grocery stores, no corner stores,” says Nichols.

The Mobile Food Market recently won second place from the IPAC Leadership Awards, with notable congratulations for their ability to work around jurisdiction and barriers.

Part of the reason they can do this, says Kemp, is because of the support behind the project, organizations from the mayor’s office, to Nova Scotia Health Authority, to the Ecology Action Centre back the market.

“The city has stepped up and contributed the bus, driver and gas in the warm months, and in the colder months contributes a van. Without that, the project would absolutely not happen,” Kemp says.
Donations have also been crucial to helping the market run smoothly.

“We don’t have a warehouse, we don’t have our own vehicles for transporting,” Kemp says, but Atlantic Superstore has offered storage space, dieticians and produce donations to the market.
The biggest challenge has been funding, but Kemp says two recent commitments from the provincial government will help the market continue for the foreseeable future. The new funding will focus on poverty reduction as well as older adults and seniors.

“With we’re able to maintain our current Halifax operation,” Kemp says, “and we’re having exploratory conversations with other parts of the province to hopefully launch a couple of other sites outside Halifax as well.”