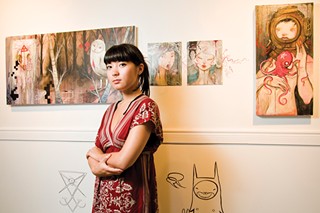 Nomi Chi is intently sketching an animal skull on a wall between several of her paintings when I arrive to meet her at Utility Gallery. I'm hesitant to disturb her, waiting several minutes before she finally takes a step back from the drawing. It's a display of the sort of commitment that's been necessary to get her where she is. At 20, the Vancouver artist has already been working as a tattoo artist for five years.

"I started at 15," she says nonchalantly. "I was in high school, looking for apprenticeships, and nobody would give me the time of day because I was so young." Fortunately, she found a neighbour, Paul Tynes, who was willing to teach her. Chi began tattooing professionally when she finished high school, and a year-and-a-half ago Tynes opened The Fall in downtown Vancouver, where Chi now works.

The Fall is a tattoo parlour, a "huge gallery space," as well as a clothing store, that puts on art shows, weekly events and parties in addition to tattooing and body piercing---the kind of multipurpose space artists dream about when they say they're going to quit their day jobs and open a business.

Chi takes a similarly multidisciplinary approach to her practice. In addition to tattoos, she also does the paintings and drawings on display for the Utility show, often does live painting performances at exhibits, has made a series of stuffed animals and toys, and is interested in getting into more sculptural and 3D work. She says her creative influences are all over the place, but specifies sci-fi novels and obscure music as recent inspirations.

"Lately I've just been listening to weird music, asking friends to hand down things to me," she says, listing the Venetian Snares, Boards of Canada and "lots of angry rap music."

There's a definite sense of the influence of biological and medical illustration in Chi's work, which she has been "into since I was a little kid," especially cross-section illustrations, along with bugs and going hiking with her dad. But the real thing is just as important: "I just bought a membership to the Vancouver Aquarium, so I've been going every weekend," she says. "It's a nice place to chill out with some fish." She takes photographs and makes sketches at home, where there is better lighting, and the influence is obvious in her tattoo portfolio, from a sliced-up rainbow fish eerily reminiscent of sushi, to delicate feathery fish skeletons.

Skulls are also prevalent; Chi says she's "infatuated" with animal skulls. "I have a big collection at home---it's kind of scary to people coming over to my house." The skulls feature into the painting at Utility thus far, which she's planning to make up as she goes along. She's done live painting performances numerous times and plans to work right through the opening (unless burnout hits first).

There's a dark, mythical feel to Chi's paintings. She's a fan of dark fairytales, and the canvases are populated by animal cross-sections and characters like an owl wearing tiny boots, human bodies with roots for feet and bird skulls for heads. Her tattoos also blend fantasy and biology, with winding tree branches and partially dissected animals.

Chi is doing a two-week guest stint tattooing at Utility, in addition to her show. She feels at ease among her friends in Halifax, and is already planning a second guest spot at the shop next summer.