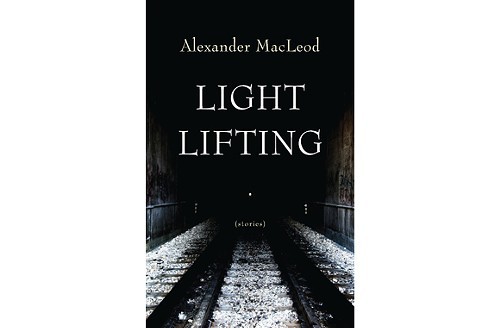 Published by Biblioasis, Light Lifting is MacLeod's first book, though his stories have appeared regularly in Canadian literary journals. He also teaches in the English and Atlantic Studies programs at Saint Mary's University.

A short feature based on a conversation with MacLeod, who's the son of the writer and academic Alistair, appears Thursday, in this week's edition of The Coast.

Among the other Giller shortlisted are Sarah Selecky's collection of short stories, This Cake is for the Party (Thomas Allen Publishers), Joanna Skibsrud's novel The Sentimentalists (published by Kentville, Nova Scotia-based Gaspereau Press); David Bergen's novel, The Matter with Morris (Phyllis Bruce Books/HarperCollins); and Kathleen Winter's novel Annabel, out from Anansi.

The Giller, which awards $50,000 to the winner (of the best fictional prose, novel or short story collection, in English) and $5,000 to the other four finalists, will be announced in Toronto on Tuesday, November 9.

It's the private-sector companion to the Governor-General's Literary Awards for Fiction, which get announced shortly after. The Giller jury this year comprised of CBC host Michael Enright, UK writer Ali Smith and American author and teacher Claire Messud.

There's always a "right kerfuffle" (to quote one of my favourite British sketch comedy characters) about awards, that punctuate awards seasons. The money gets people worked up. Some question the jury's choices, jurors' credibility, backroom shenanigans and whether this or that author's deserves to even be shortlisted, let alone winning.

Vancouver-based Geist Magazine just resurrected, from a few years back, its piece by Stephen Henighan. In it he takes issue with the Giller, to put it generally and mildly. The mag also runs excerpts from Selecky and Winter, both of whom have written for the Geist. In its latest e-newsletter the mag employs "kafuffle," not "kerfuffle." According to my trusty Canadian Oxford Dictionary, both are acceptable uses and are based on a Scottish word, "curfuffle," itself derived from "fuffle," meaning to disorder.