Councillors say the $7.3-million infrastructure project is well worth the cost. 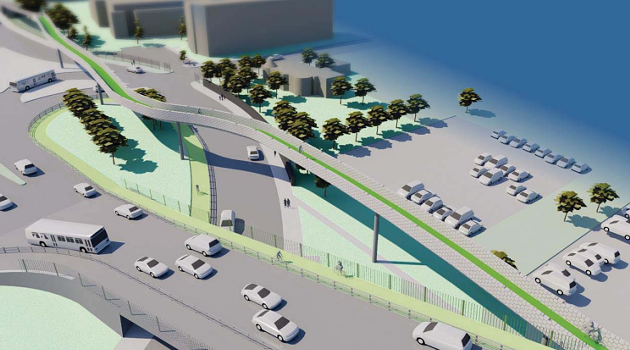 VIA HRM
Cheaper alternatives, like installing a traffic light on the current Halifax exit ramp, were considered but decided against by HRM.
The city is going to drastically overhaul how cyclists travel to-and-from the Macdonald Bridge.

At $7.3 million, the new project isn’t cheap. But it is vital, said councillor Sam Austin, as the bridge is the main artery connecting cyclists in both halves of the urban core.

“If you think about where we’re going to spend money on infrastructure, the Macdonald Bridge is it,” Austin told his colleagues. “This is the situation where it makes sense to spend the cash if we’re going to do something significant.”

The Macdonald’s current access and exit ramps were designed 18 years ago with the bridge’s separated bike lane. Both feature planning flaws that have long been the bane of HRM’s cyclists. On the Halifax side, a steep incline towards North Street is near-impossible to climb. In Dartmouth, cyclists have to contend with high volumes of vehicular traffic.

The new exits will utilize side streets and new bike lanes along Wyse Road in Dartmouth, while the Halifax side will see a flyover ramp built for cyclists continuing on to North and Gottingen Streets.

Most of the project’s price tag is eaten up by that flyover ramp’s construction, but Austin brushed off expense concerns. The municipality already spends an inordinate amount of money on automobile owners, he says.

“We spend tens of millions of dollars a year on roads,” the mayor said. “This is the bridge we have to cross, folks...If we’re going to do that, it’s going to cost us some money.”

That cost, according to Savage, is well worth the benefits.

Detailed design work for the ramps will still need to be submitted. The project isn't slated for completion until 2021.

Hammonds Plains–St. councillor Matt Whitman was the sole vote against the proposal.